64-year-old Richard Mandella is back. It's fitting that the year that Del Mar decides to junk the artificial surface and return to dirt, that Mandella is going to have 2 brilliant horses, the likely 2 favorites, in the 2015 Pacific Classic this weekend. The P. Classic, the Del Mar Summer Meet's signature event, missed on 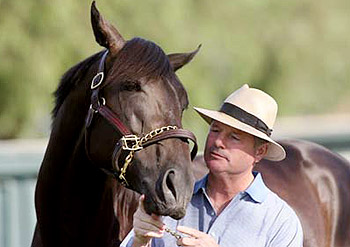 convincing Triple Crown winner American Pharoah to run, but it won't miss out on Mandella's top horse, the mare Beholder. A 5-year-old, Beholder has 13 wins and 3 seconds from 18 lifetime starts. She's got a great shot to give Mandella yet another win in the Pacific Classic. If Beholder doesn't close the deal, Mandella's got the other favorite, Catch A Flight, in this weekend's P. Classic. Mandella has done this before. In 1997, Mandella sent out the 2 favorites in the P. Classic in the brilliant Gentleman and the equally brilliant Siphon. Amazingly, he finished 1-2 in the race after Gentleman won and Siphon finished second.

Cup races at the time, the Juvenile Fillies with Halfbridled and the Juvenile with Action This Day. Papa Mandella won an amazing $4.6 million  in the 2003 Breeders' Cup. That's still a record. Because of the awesome Breeders' Cup Day that Mandella had, his horses ended up earning $9,871,468 for the year.

Mandella's greatness started in the early 1970's. He was an  assistant trainer to Lefy Nickerson in New York and then a private trainer for Richard Baugh. By 1976, Mandella had opened a stable in California. By 1981, Mandella had recorded his first million dollar plus earnings year. Since 1981, Mandella has recorded 35 straight years of at least $1 million in earnings. Among Mandella's more famous starters was the terrific Kotashaan, who beat the Paco Gonzalez trained Bien Bien in the 1993 Breeders' Cup Turf. Kotashaan would go on to win the Eclipse Award for Horse of the Year. the P. Classic on a 16 race win streak. Cigar was a 1 to 9 favorite to break Citation's amazing win race streak, but Mandella had other ideas. By design or pure luck, Siphon, the second choice in the race ended up as a rabbit. Siphon and jockey David Flores pushed Cigar and Bailey into a blistering pace for a mile and a quarter. The 6 furlongs was run in 1:09 and change and Dare And Go, Mandella's other horse in the race and a 39 to 1 long shot, passed Cigar in the stretch. It was yet another awesome conditioning job by Richard Mandella.

No horse that Mandella has trained, not Siphon or Gentleman or Sandpit, not Pleasantly Perfect, not Dare and Go, not even Kotashaan, could go down in history as being as great as Beholder. It's amazing that a legend like Mandella, who is already in the National Museum of Racing Hall-of-Fame, is currently training the most special horse that's he's ever had the privilege of conditioning. That's the greatness of Richard Mandella.
Racing
Loading...