Welcome to another Southland monthly preview of the Five Up & Coming Young Greyhounds To Watch. November's selections certainly look like they will give a solid showing in the coming weeks and months as their young careers have already gotten of to a very good start. The only requirement that I use in selecting the 5 up and coming young greyhounds to watch each month is that they have had no more then 10 official starts prior to being selected. Please check back as every two months or so I will give updates on the progress of our selections. Good luck to everyone and thanks for reading. 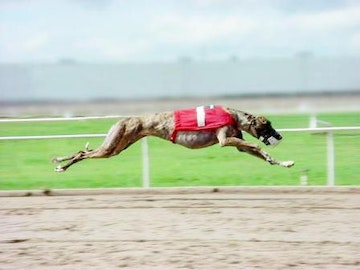 NOVEMBER'S Five Up & Coming Young Greyhounds to watch at Southland

CANAAN BOOGIE - 6 starts - 1-3-2-0 - running in Grade D now - next race - Sunday, Nov 1 - He has already shown good early speed with a nice rush to the turn as well as a late move down the stretch. Promising young greyhound who has a mid to rail running style, keep an eye on him.

DUTCH BOGIE - 10 starts - 4-2-1-2 - running in Grade A now - This is a strong young pup who has already moved up to Grade A and who shows a tremendous late move while not afraid to run thru trouble. A wide runner with tons of potential, well worth watching in the future.

KELSOS FOREGONE - 8 starts - 2-2-2-1 - running in Grade C now - He's got decent early speed to go along with a big closing effort and has 7 top four finishes in his young career of just 8 races. A mid-track to wide runner who has also shown the ability to run good despite encountering trouble. A solid effort each time out bodes well for him in his racing future.

KELSOS REPRIEVE - 8 starts - 2-4-1-0 - running in Grade C now - next race Monday, Nov 2 - He is coming off 2 straight wins and will try to make it 3 in a row Monday. A nice rush to the turn to go with a strong late move should have him contending for money finishes for quite some time.

MARS AWAKEN - 7 starts - 1-3-1-1 - running in Grade D now - He's got a decent rush to the turn and a big closing run, in his first 7 races he's had 6 top four finishes so he should be included in any trifecta or superfecta plays even if you were to choose not to play him to win or in quinellas. Watch him a couple of times and I think you'll be impressed with his ability to come from behind.

Good luck to all and thanks for reading.