Welcome to another Southland monthly preview of the Five Up & Coming Young Greyhounds To Watch. September's selections consist of some hard running youngsters that have started their careers with some impressive wins and one that is just hitting the track. There were quite a few greyhounds that had credentials to make this list and the choices were certainly tough to make but I believe the selections below all have the 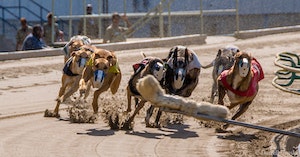 potential to be Southland stars.  As many of our regular readers probably know, the only requirement that I use in selecting the 5 up and coming young greyhounds to watch each month is that they have had no more then 10 official starts prior to being selected. I try to give updates on the progress of these selections every few months so be sure to check back for those. I will have a recap of the past few months choices in a week or so, be sure to check back for that. Thanks for reading and good luck with your wagering opportunities. Please remember that BetAmerica is always available to answer any questions or concerns you may have about wagering online.

PJ CASHURTICKET - 4 starts - 0-1-2-1 - Solid start to his career with 4 top four finishes in 4 races despite having trouble in his last 3 outings. Looks to have some early speed but shows nice ability to come from behind despite bumps and being blocked at times. Has a mid-track running preference and gives 110% each time out. While he might not get the wins, looks like you'll be able to count on him as a key in your trifecta and superfecta plays. Next race - race 7 - box 8 - Grade M - Thursday, September 22

QUIRKY ESPEON - 4 starts - 1-2-0-1 - Shows good early speed along with a strong late move which bodes well for this talented rail running greyhound. He should continue his upward move in class. He's run some very good times so far including a dazzling 31.81 and he's been consistent as well. Keep a watch on him in the coming months, future looks bright at Southland.

SUPER C REDMAN - 6 starts - 4-0-2-0 - Very impressive young pup who has not only moved up from Grade M to Grade A in less than a month but who also has shown he's capable of running with the best at Southland with a win and a second place finish in the first two stakes races of his career. A tremendous rush to the turn sets him up well for his inside running style so keep an eye on this one as he's already making his mark and has a darn good shot at making the Finals of the 2016 Southland FESTIVAL OF STAKES in his division. Next race - race 5 - box 3 - Grade SAA - Wednesday, September 21

TEMPEST - no starts - 0-0-0-0 - This young female pup hasn't had any official starts yet but from looking at her schooling efforts, she's more than capable of getting a win the first time out. She's got a strong rush to the turn to go along with her rail running style but what's caught my attention is her blistering late move down the backstretch to the finish line. Schooling shows 2 big wins, one by 11 lengths and one by 16 1/2 lengths. This pup has huge potential so definitely keep an eye on her. Next race - race 3 - box 5 - Grade M - Thursday, September 22

VJ MAJOR PAYNE - 4 starts - 3-1-0-0 - He's already up to grade B in just 4 races over the past 3 weeks and I wouldn't be surprised if he keeps the winning streak going here. Tons and tons of early speed for this rail runner who has had the lead by the first turn in each of his official starts and has held the lead in all of them except a couple races back when he was caught at the wire and finished second. Next race - race 4 - box 6 - Grade B - Thursday, September 22