Crushed Velvet to Crush its Competition? 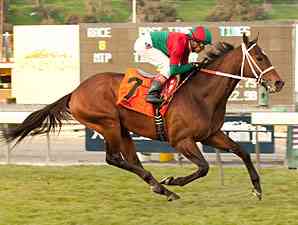 At Santa Anita, a field of four was entered in the Grade 2, $200,000, Santa Ynez Stakes at 6 1/2 furlongs.  The morning line favorite is Crushed Velvet at 4-5.  The Bob Baffert trainee was an impressive maiden winner at this distance on December 8.  Taste Like Candy was second in the Grade 1 Hollywood Starlet at 1 1/16 miles the day before Crushed Velvet's debut. If those two battle for the lead and it's a suicidal pace, then Uzziel can pick up the pieces.  But as long as each horse finishes the race she will earn points towards the Kentucky Oaks point series.

Also at Santa Anita that day is the Grade 2, $200,000, San Gabriel at 1 1/8 miles on the turf.  The winner of this race last year, Jeranimo, returns to defend his title.  The Michael Pender trainee makes his first start since finishing well in the Grade 1 Breeders Cup Turf Sprint.  He retains the services of Rafael Bejarano, who was aboard for his last two victories.  But as the 3 to 1 favorite, we will look to beat the starting high weight of the race.

Dubai You X Y Z stretches  out after a victory versus optional claimers as the favorite when he was making his first start since May.  He has good tactical speed and should make the first move towards the lead while Jeranimo will have to navigate through traffic from far back.

While Sweet Whiskey is the morning line favorite in the Old Hat, we like Milam to get the victory here. The Eddie Kenneally trainee comes off a victory as the favorite versus optional claimers at Churchill Downs on Nov. 30th. She knows how to rate and finish well, which should help her versus these since we expect a fast early pace. 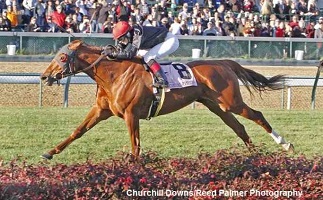 The Marshua's River is an interesting race because there is plenty of good early speed and tactical speed in the race.  This should turn into a jockey's race, with the reins men trying to figure out when to make the move for the lead and avoid getting caught in traffic.

Floral Romance for Hall of Fame trainer Bill Mott comes off a victory by a nose at Belmont in October versus optional claimers.  She has been working well at Payson Park or this spot and gets Joel Rosario to ride.  He should guide her to clear running after saving the ground early and get up for the victory. Deanaallen'skitten for Chad Brown seeks her third consecutive victory and can also get the job done under Alan Garcia. Abaco is the 3-1 morning line favorite but breaks from post 12. The Shug McGaughey trainee needs a perfect trip under Javier Castellano to get the job done.

The Spectacular Bid drew a field of 8, but two horses, Cool Cowboy and Giancarlo, are cross entered at Tampa Bay in the Pasco Stakes.  The morning line favorite is Corfu.  The Todd Pletcher trainee adds blinkers for his first start since tiring to fifth at Laurel James F. Lewis Stakes in November.  But the post time favorite might be his stable mate Trail Blaze.  When making his career debut he drew off to break his maiden by 4 3/4 lengths at Aqueduct on November 20th.  He comes in with the bullet work and with natural improvement he will be tough to beat here.