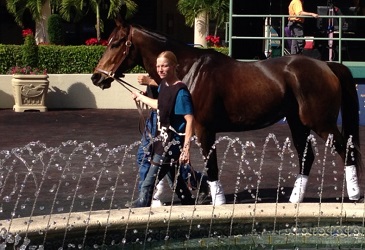 It's a busy day in south Florida, as Miami will host 11 stakes races between Gulfstream and Calder on this first Saturday in December.

Calder has a trio of G3 events with the My Charmer, the Tropical Turf, and the Hooper; while across town, Gulfstream is hosting the annual Claiming Crown showcasing eight divisions of hard-knocking horses.

And for those wanting to play some later races: Hollywood Park has a pair of stakes races for the ladies that are sure to entertain with the G1 Hollywood Starlet for 2yo fillies and the G2 Bayakoa for the distaffers.

Though it’s close, I’m a bit surprised to see 1-Tetradrachm favored over 4-Bad Debt on the morning line: the former should be forwardly placed after showing speed against much tougher groups in last two outs; the latter is a head away from having a perfect fall campaign and could not have won the local prep any easier. The best value could be in 6-Philly Ace, one of two from the Clement barn. The bay son of Smart Strike – who has been off a year – has been firing bullets over the Payson Park dirt in recent works and Clement/Blanc are a perfect 1-for-1 with a hefty payoff. To round out the exotics, consider 7-Exothermic stretching out off the win and the speed of 5-Heiko.

8-Voodoo Storm enters the $200,000 Claiming Crown Jewel on Saturday at Gulfstream Park off the strength of back-to-back wins, including the Mountaineer Mile in his last start.  The five-year-old Storm Cat horse ran this summer at Ellis Park for $25,000 making him eligible for the Jewel.  While Voodoo Storm is winless in four starts at Gulfstream Park, 7-Bernie the Maestro has won three of his seven at the Hallandale Beach track.  Bernie the Maestro earned his eligibility for the race in 2012, but has not run for a tag since being claimed by the current connections for $35,000 at Saratoga in August 2012.  Bernie the Maestro will be out winging on the front end with Nevada Kid and Voodoo Storm may not be far behind.  On paper, the race sets up for a closer such as 3-Nevada and 6-Flatter This.  Nevada has been in-the-money eight of his 14 career starts including three-for-five at Gulfstream.  He should love the distance as one of only three in the race to win at nine furlongs.  Flatter This will be a long shot on Saturday and is worth a long look on a fair race track: with 10 shows in 53 starts; however, Flatter This may be best left underneath. - Matt Carter