It is with a heavy heart among racing fans that Hollywood Park will close its doors forever next weekend. But last weekend the legacy of the track may live on for years to come because of one horse. Shared Belief, a two year old gelding by Candy Ride,  not only stamped himself as a major contender and possible favorite for the Kentucky Derby, he may turn out to be the savior that horse racing has been looking for with mainstream media. 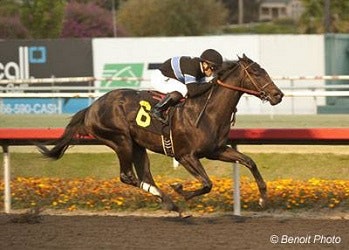 After his maiden win on October 19th, he was purchased by Jungle Racing, LLC, who has as majority owner Jim Rome, the nationally syndicated sports broadcaster. After his victory in the Grade 3 Hollywood Prevue Stakes, Shared Belief was sent off the even money favorite in the Grade 1 Cash Call Futurity with his regular jockey Corey Nakatani aboard. He stalked pacesetter Brother Soldier and then the race was won by a non move on the backstretch.

Gary Stevens on Candy Boy was tenth entering the backstretch but once the colt by Candy Ride got to the outside for a clear running lane, he went from tenth to taking the lead before entering the far turn. The veteran Nakatani did not panic and try to have Shared Belief to go with Candy Boy, remaining outside of Brother Soldier in third going into the turn while under a good hold. Under no urging Shared Belief got on even  terms with  Candy Boy at the top of the stretch. Once Nakatani let him loose, race was over as Shared Belief drew off to win by 5 3/4 lengths.

Every year racing has been clamoring for a savior, a horse that can capture the attention of fans and the mainstream non racing fans, especially if they can win the Triple Crown. While horses like Smarty Jones, Barbaro, Big Brown and I'll Have Another have been thought of as saviors and possible Triple Crown winners , for one reason or another they did not get the job done and had their careers end prematurely.

But let's look at facts, if a horse won a Triple Crown, what are the chances we would ever see that horse run again. The offers from farms to bring that horse to be the stallion would be overwhelming. Insuring the horse after winning the Triple Crown would be cost prohibitive. The risk would not be worth it so that Triple Crown winner would most likely be retired.

Shared Belief could be what everyone is looking for. He is a gelding so the pressure of retiring him for a stud deal is nonexistent. He can run for a long time as long as he is healthy so the marketing of a horse like this if he won the Triple Crown is endless. With Jim Rome as an owner, the talk of Shared Belief and the Triple Crown would be a major topic in the Jungle, which is what he calls his show that is heard five days a week on the CBS Sports Radio Network.

His Beyer fig of 106 is the highest by a two year old this year, 4 points better than Havana's 102 going 5 1/2 furlongs at Saratoga in August. According to the DRF Leaderboard, only the top 3 finishers of the Cash Call Fururity, Shared Belief, Candy Boy with 95 and Tamarando with 92, have run a Beyer fig at a route that puts them in the top 25 top figs earned by a two year old this year.

Granted Shared Belief has only run on an all-weather surface, but he has the look of something special. With Hall of Fame trainer Jerry Hollendorfer calling the shots, Shared Belief is in more than capable hands.

Not only did Hollendorfer win the Cash Call Futurity, he sent out the first three finishers in the Grade 3 Native Diver, Blueskiesnrainbows, Hear the Ghost and Rousing Sermon. Ridden by Martin Pedroza, Blueskiesnrainbows wired the field to win by 1/2 length.

Lucayan stamped himself as the turf runner to watch as he won the Grade 2 Hollywood Turf Cup. Joel Rosario had Lucayan last for most of the race. Despite slow fractions, Rosario was able to get the Neil Drysdale up to catch Temeraine near the wire for the victory.

At Gulfstream, Heart Stealer came off the pace to catch pacesetting R Free Roll to win the $100,000 Grade 3 Sugar Swirl. Ridden by the nation's leading rider Javier Castellano, Heart Stealer ran the six furlongs in 1:09.49. It was the second stakes win of the day for Marty Wolfson, who won the Kenny Noe Jr. Stakes at Calder earlier in the day.