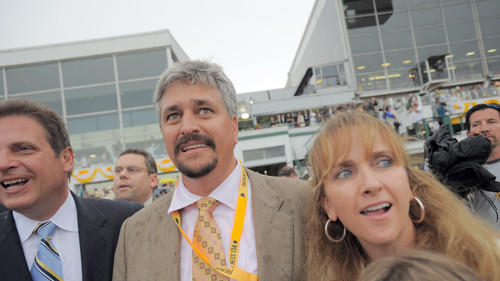 Finally, Steve Asmussen is eligible for the National Museum of Racing Hall of Fame. Asmussen wasn't on the ballot in either 2014 or 2015 due to allegations of animal abuse from PETA. Asmussen has been exonerated of those allegations, which is why he's eligible in 2016.

*Photo above taken from the Baltimore Sun

Most feel that Asmussen is a lock to get into the hall of fame. He trained, arguably, the top male and the top female horses to run in the past 10 years in Curlin and Rachel Alexandra. Not only that, but Steve A. is tearing it up in 2016 as well. He's saddled 65 winners from 280 starters as of March 6. Asmussen's horses have already earned $2.25 million in 2016.

Since Asmussen is a lock for the hall of fame, I thought it might be a good time to highlight the Top 5 horses that Asmussen has trained during his still going strong career. As always with my blogs, this is just my opinion.

Steve Asmussen's Top 5 Horses
1. Curlin - Since the Dubai World Cup is this month, I thought it might be cool to add Curlin's 2008 Dubai World Cup win to this blog. Curlin won Horse of the Year in 2007 and 2008. In 2007, he finished third to Street Sense and Hard Spun before beating those rivals in the Preakness. He lost the Belmont by the slimmest of margins to Rags to Riches. Going off as the 4th betting choice in the 2007 Breeders Cup Classic, Curlin beat Hard Spun. In 2008, Curlin won the Dubai World Cup, the Stephen Foster and the Jockey Club Gold Cup. He finished fourth in the Breeders Cup Classic but that might have had something to do with the race being run over the synthetic at Santa Anita that year. Curlin even finished second over the turf in the G1 Man O' War Stakes in 2008.
2. Rachel Alexandra - I had to post Rachel's Preakness win over the boys again. This was the first race in which Steve Asmussen trained the brilliant daughter of Medaglia D'Oro. Rachel Alexandra won Horse of the Year in 2009. What it means is that Asmussen trained the Horse of Year for three years in a row. That's impressive! I wrote an entire blog on Rachel last week.
3. Untapable - From one perspective it seems like there is a huge drop off from Rachel Alexandra and Curlin to Untapable. But from another perspective the drop off doesn't seem that significant. Like Rachel, Untapable won the Kentucky Oaks. Untapable also won the Cotillion, the Mother Goose and the Breeders Cup Distaff in 2014. She won the Apple Blossom in 2015. She was scheduled to run in 2016 until she had to retire. Untapable was a solid racehorse that gave a great effort every time she hit the track. She could turn into an excellent broodmare.

4. Pyro - In 2008, Pyro won both the Risen Star Stakes and the Louisiana Derby. He ran a credible eighth behind the awesome Big Brown in the Kentucky Derby. Asmussen would condition Pyro to a second place finish in the Jim Dandy, a third place finish in the Travers, and a second place finish in the Indiana Derby before a sixth place finish in the Breedrs Cup Dirt Mile. Pyro's owners, Winchell Thoroughbreds LLC, sold Pyro to Godolphin before 2009. Godolphin retired Pyro to their Darley Japan Stallion Complex in 2010. His fee is 2,000,000 yen.
5. Tapiture - Under jockey Rosie Napravnik, Tapiture was oh so close to taking home the Breeders cup Dirt Mile in 2014. Goldencents held off Tapiture, but, man, it was a close race! Some may believe that Tapiture doesn't belong on this list. I think that he does. He won the Grade 2 Kentucky Jockey Club Stakes as a 2-year-old. As a three-year-old, he took down the Grade 3 Southwest, finished second in the Rebel and then fourth in the Arkansas Derby. He bounced back from a fifteenth place finish in the Kentucky Derby to win the G2 West Virginia Derby and the G3 Ack Ack Handicap before his run in the BC Dirt Mile.

If you're not playing the BetAmerica Daily Racing Contests, you'r missing out!  Log on today!
Racing
Loading...