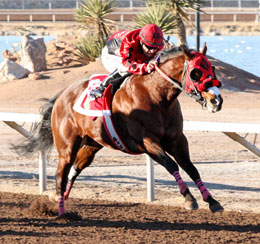 The 2015-2016 live racing season at Sunland Park Racetrack and Casino gets underway Friday, December 18 and will offer quality Quarter Horse and Thoroughbred action.

Some of the top older Quarter Horses in the country, including AQHA world champion Jrc Callas First, are expected to compete in the $350,000 Championship at Sunland Park on December 27.

The marquee Thoroughbred stakes is the $800,000 Sunland Derby (Grade 3), which has sent several noted winners to the Kentucky Derby, including Mine That Bird and last year's champion Firing Line, who finished second to eventual Triple Crown winner American Pharoah. The 2016 Sunland Derby will be run on Sunday, March 20.

Live racing at Sunland Park will be conducted on a Friday, Saturday, Sunday and Tuesday basis for most of the season. There will be no racing on Christmas Day, Friday, December 25. A special Monday card on December 28 will make up its place. Tuesday programs will be all-Thoroughbred cards. Nine races are planned daily with a 12:45 p.m. post time.