The Great Jack Van Berg Passes Away at 81

National Racing Hall of Fame Trainer Jack Van Berg passed away this past Dec. 28 at the age of 81. Per BloodHorse, he had been hospitalized at Baptist Medical Center in Little Rock, Arkansas, due to complications from caner.

Van Berg made it into the hall of fame in 1985. That was a 2 full years before his  most famous horse, Alysheba, won the Kentucky Derby and Preakness Stakes. Van Berg passes ranking 4th on the all-time win list for North American trainers. Jack won $6,523 races. His horses earned more than $85 million.

Alysheba - Alysheba, a son of Alydar, was easily the most accomplished thoroughbred that Jack Van 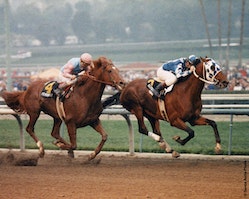 Berg ever trained. Alysheba finished his career with 11 wins, 8 second place, and 2 third place finishes from 26 starts. He earned an incredible $6,679,242 during his career.

That tells you how amazing Alysheba was. Check out 4 of Alysheba's biggest races.

This has to be one of the most memorable Breeders' Cup Classics of all time. Alysheba flat out laid it on the line against Ferdinand, a monster of a horse. The ill-fated Ferdinand had won the 1987 Kentucky Derby for the great Charlie Wittingham. Ferdinand looked like a loser in the middle of the stretch. That's what the greats do. They keep plugging away. Alysheba exacted revenge over Ferdinand in the 1988 Santa Anita Handicap.