I had no idea that I was going to be watching the greatest day in Palm Beach racing history when I woke up last Friday morning (July 24, 2015). It's just not something you expect to happen everyday.

Palm Beach County had consistently been getting rain for the past week after a long summer drought. The rain coming down heavy at times was making the track surface extremely slow, as the fastest sprint time all afternoon was a 29.78 secs run in the 11th Race by a greyhound named Dusty Lane. Nothing out of the ordinary or historical could possibly come about on this date. 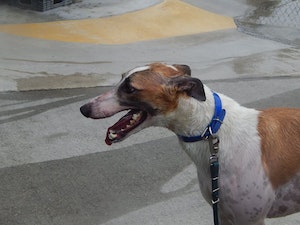 A huge puppy prospect named Speeding Bullet from the Janie Carroll Kennel was up next in the Grade C 13th. Bullet had been very impressive coming back from Southland Greyhound Park, bolting a 29.35 secs victory two races back and looking to continue to climb up to the top level Grade A. Out of the 8 box, this was by far the easiest play all afternoon.

Bullet flew out of the box and immediately took the lead from the outside. The competition hung in there for a few moments but as soon as they reached the tote board, Bullet put on after burners that were unmatched before in this sport. With mud flying everywhere from his paws, he crossed the line in easy fashion, with no other racer even on camera shot at the end. 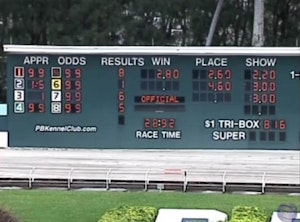 In the 83 years that Palm Beach has been running greyhound races, no dog had ever run this fast. No racer had even broken 29 seconds before! This was a race and a greyhound for the ages. Speeding Bullet was now instantly a worldwide superstar. 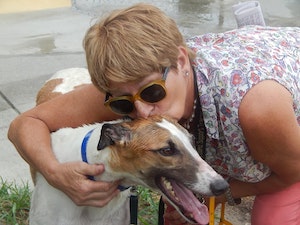 I immediately posted the replay on Facebook & Twitter and got responses from around the world in disbelief at what they had just witnessed. I went on The Backstretch Show on 959ThePalm.com afterwards and discussed with head trainer Monica Smith about the historical achievement her hound had just accomplished. She said, “I never ever expected he was going to do this, he ran the race of his life today. I was just overwhelmed today with that race he showed us.”

After all this, this date could already be one that all of us that follow Palm Beach and greyhound racing would remember for the rest of our lives.

Then it happened again. 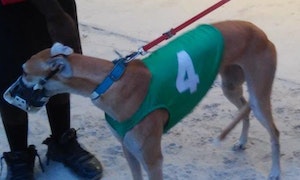 The Friday night cards at Palm Beach have featured the top Marathon (738 yards) racers going head to head for the past few months. No other greyhound had been quite as dominant as Atascocita Jolie from Suncoast Racing at this distance. Jolie is right up there with one of the greatest closers I’ve ever seen, coming back from last place to win an astounding six times in her career here. Jolie already owned the Marathon record from June 26, when she topped a combined record from 2007 with a 41.41 secs showing.

Anybody that has watched Jolie race knows that she does not break well to start, but tonight, busted out of the box in the 6th Race and was up following the leaders closely in 4th place. Everybody including me knew that it was a formality at this point that she was going to be victorious. As she zipped towards the finish line, track announcer Mike Jameson knowing that something special was about to happen shouted out, “Watch the time on this one, Jolie has left the rest. That’s the Queen of the Dixie Course! One of the best Marathon greyhounds in the world today. That’s Atascocita Jolie!”

We all were watching the tote board as Presiding Judge Ramon Cadavieco put up another time that had fans around the world shaking their heads once again….41.23 secs (pictured at top.)

I immediately texted Mike Jameson and all I could say is “Twice in one day, are you kidding me?” In his shocked state I'm sure, all he could write back was “Glad I was part of all of it.”

To say this was the best day ever at Palm Beach is saying a lot.  This is in fact the home of Pat C Rendezvous, who on June 4th, 1994 set the World Record for consecutive wins with 33 on a night that had over 7,000 people in the grandstands.

Two records in the same day at the Palm Beach Kennel Club though is just mind boggling. In all of the dates that this track has opened its doors, no other was ever quite like this. No single date had ever seen two course records broken on the same day and I would imagine it probably doesn’t ever happen again. July 24, 2015 will go down as one of the most historical times in greyhound racing history and will be talked about for generations.

You just can’t make this stuff up. Incredible script that the greyhounds had us witness on this day.

Here are the replays of the historic races: 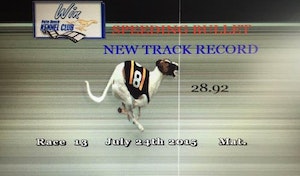 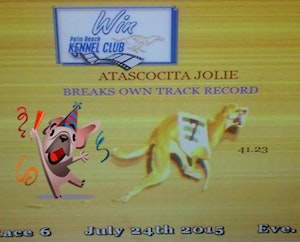