The Iconic Dash For Cash 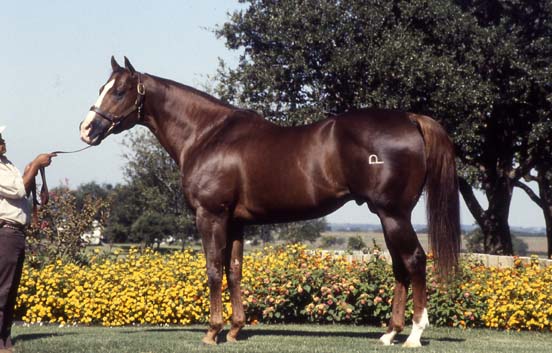 Dash For Cash was exceptional as both a racehorse and stallion

Lone Star Park in Grand Prairie, Texas, will host the $448,515 Dash For Cash Futurity on Saturday, October 10. Nucky, a 2-year-old son of Dominyun, will be the big favorite in the final. The Texas-bred is a perfect five-for-five in his career, and set the fastest qualifying time in trials, drawing off by a commanding margin.

The stakes is named in honor of Dash For Cash, the legendary American Quarter Horse who is arguably one of the sport's finest. Born in 1971, Dash For Cash amassed a tremendous career record of 21 wins from 25 starts. Trained by “Bubba” Cascio, Dash For Cash also benefitted from the tutelage of D. Wayne Lukas for several of his California starts.

He won $507,688 during his career. His victory races are the Champion of Champions (1976, 1977), Sun Country Futurity, Los Alamitos Invitational Champ, Los Alamitos Derby, Vessels Maturity, Lubbock Downs Futurity. Dash For Cash was honored as AQHA World Champion in 1976 and 1977.

Dash For Cash retired from racing in 1975 and became a prolific stallion, standing stud at 6666’s Ranch in Guthrie, Texas, until his passing in 1996. He sired 751 winners, with 135 stakes winners, with his most famous offspring being First Down Dash. The progeny of Dash For Cash earned $37,386,838, and that was years before the huge purses of the last several years in the industry.

He was inducted into the American Quarter Horse Hall of Fame in 1997 and will always be considered one of the industry's most highly regarded racehorses and stallions.

So on Saturday night, when you are enjoying Nucky and his nine rivals compete in the 2015 Dash For Cash Futurity, take a moment to remember one of the all-time greats!
Racing
Loading...