The Jazzman: from babysitter to Pick 6 hitter 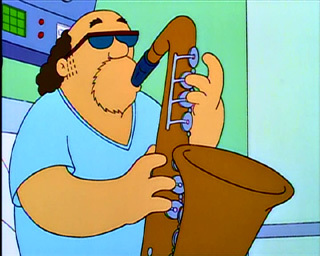 Six years ago when “a crazy girlfriend” he had met at church dragged The Jazzman to Palm Beach Kennel Club to babysit her kid so she could bet the races, the South Florida musician never imagined he’d be playing the races from home let alone winning $270,448 on a $10 wager in the process.
But that’s exactly where the blues player from West Palm Beach found himself on Monday when he turned a $10 Pick 6 play on TwinSpires.com into $270,448, and he’s taking requests on what to do with the money.
“I have some bills to pay off, and I’ll probably put the rest into a money market account,” The Jazzman said. “I need to do something exciting, though. Got any ideas? I’ll probably take some swings at Gulfstream’s [$500,000-plus Rainbow^6] carryover.”
The Jazzman is no stranger to small bets with big rewards. In 2009 he hit a $53,000 Pick 6 at Fairplex on a $4 ticket. For his more-than-quarter-million-dollar score on Monday, he played three tickets: a $2 ticket using all favorites, a $4 ticket using no favorites, and a $4 ticket combining his most likely winners with the longshots he liked most such as Renee’s Titan in the Santa Ynez.
It was that last $4 ticket that hit for $270,448 as one of two winners of the bet on the day.
“I got up Monday planning to play the Pick 6,” The Jazzman said. “The first thing I do is download the Brisnet past performances on TwinSpires since I get those for free when I bet and look at pace, speed, and class. Then I look at the jockeys of contenders. The thing I follow most is Southern California jockeys; I follow those jockeys like a groupie follows rock stars.”
The Jazzman credits knowing all the jockeys in the colony—not just the stars like Mike Smith and Rafael Bejarano—with leading to his Fairplex score, and his faith in Tyler Baze served him well when that journeyman piloted Renee’s Titan to win the Santa Ynez over heavily favored two-year-old filly champion Beholder in her three-year-old debut.
The Jazzman’s strongest opinion was in the last race with $6.20 winner Judge Carr. Live to only that horse for a monumental score instead of hedging with others in the race, he simply bet Judge Carr to place to add another $3.40 to his $270,448 score.
Despite the big score and zest for chasing other carryovers, The Jazzman doesn’t plan to change his approach.
“I learned to handicap using the Brisnet PPs,” he said. “There’s so much information there I remember the first time I opened it up and said, ‘My God.’
“But I stuck with it and stuck with my approach of always making a concerted effort to bet a small amount of money. I don’t like to overwhelm myself with a bunch of horses in every leg. These guys sit around at the track and they have ten horses in a leg and still lose.
“You can do a lot with $200, but you can do a lot with $10 too. The most important thing is you have to study."