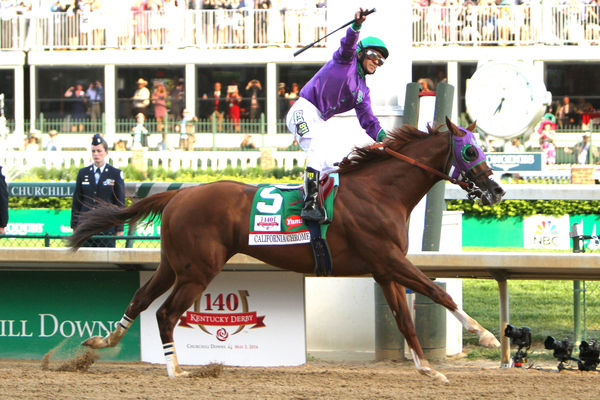 A Brief History of California Chrome

California Chrome is one of the most popular American horses in training in 2015. As a three-year-old, he won the Santa Anita Derby, Kentucky Derby, and Preakness Stakes, among other races, and was named 2014 Horse of the Year and Champion Three-Year-Old Colt.

Part of California Chrome’s popularity can be attributed to his humble roots and connections. California Chrome is a California-bred son of sire Lucky Pulpit, whose fee was a bargain at just $2,500 (now $10,000). Chrome’s mare, Love the Chase, was purchased for $8,000 by first-time owners and breeders who were part of a racing syndicate at Golden Gate Fields. Though both sire and dam were fairly-well bred, they lacked the extensive pedigree and expense that comes with many Derby contender families.

Chrome’s trainer, Art Sherman, is an unassuming but talented horseman who stables the colt at Los Alamitos. Sherman’s experience stretches back for decades; early in his career, he was the exercise rider for 1955 Kentucky Derby winner Swaps. Like Chrome, Swaps was also based in Southern California and won the Santa Anita Derby. It seems only fitting that Swaps appears several generations back in Chrome’s dam’s pedigree.

California Chrome showed some talent in his early races, but did not blossom until he was paired with jockey Victor Espinoza. Together, they won the King Glorious Stakes at Hollywood Park, which also holds the distinction of being the last stakes race held at Hollywood Park on closing day of the facility’s final meet.

Journey To The Triple Crown

Chrome returned as a three-year-old to win the California Cup Derby, the San Felipe Stakes (G2) and the Santa Anita Derby (G1). He entered the Kentucky Derby as the post-time favorite, defeating a talented field that went on to be successful in their three-year-old and four-year-old campaigns. Chrome won the Preakness Stakes as a heavy favorite, but failed to secure the Triple Crown when he finished fourth to Tonalist in the Belmont Stakes. In addition to the grueling campaign as a three-year-old, as expected of any horse bidding for the Triple Crown (and lamented by one of Chrome’s vocal owners, Steve Coburn), Chrome cut his hoof leaving the starting gate, further inhibiting his chances of success that day.

After a much deserved rest, Chrome returned to finish a mediocre sixth in the Pennsylvania Derby but followed that with a respectable third place finish by a narrow margin in the prestigious Breeders’ Cup Classic (G1) at Santa Anita. Interestingly, the top four finishers were all three-year-olds, including the winner Bayern, UAE Derby winner Toast of New York, and then-undefeated Shared Belief. Chrome capped his three-year-old career with a win on the turf for the first time in the Hollywood Derby at Del Mar; though the field was small, the runner-up was 2014 Canadian Horse of the Year Lexie Lou.

Chrome’s 2015 campaign to date includes a second-place finish behind Shared Belief, arguably one of the best horses in training, and a remarkable second-place finish in the Dubai World Cup at Meydan Racecourse in Dubai against top horses from around the world. Chrome is currently in training in the UK, preparing for an ambitious campaign against more of the world’s best horses at the prestigious Royal Ascot meet this summer.

Scroll over any box below to view the historical records for California Chrome:

Eclipse Award 2014 Horse of the Year

Remember to Bet the Races!

If you didn’t place your bets at the 2014 Belmont Stakes, you may have missed a great opportunity to bet on an upset. Although much of America was pulling for California Chrome to pull through and become the first Triple Crown winner since 1978, Tonalist came through as the victor with 12:1 odds. Those who chose wisely received a nice payout, so don’t miss out on your chance to win big at the 2015 Belmont Stakes! Become a member of the BetAmerica community today!