As horseplayers we’re well aware of Santa Anita, Del Mar, Churchill, Belmont and Saratoga. We’re also aware of Keeneland and Woodbine in Canada. Those race tracks are part of the history and glory of the Sport of Kings.

Santa Anita is where Seabiscuit ran in the very first $100,000 race. Del Mar is the race track that Bing Crosby created so that he and his buddies had a place to hang out at during the summer. Churchill Downs? Forget about horse racing. The Twin Spires is one of the iconic images in all of U.S. history. Belmont Park is where it felt like Secretariat was going to break a land speed record and showed the world something that they had never seen before and will never see again. Saratoga, the Graveyard of Favorites, is the oldest race track in the United States. Keeneland and Woodbine have their own unique qualities that will never be replicated.

But this nation is full of great race tracks. Below are my three favorite tracks outside of the famous racing venues.

Oaklawn Park – I’ve been in love with Oaklawn Park since 1998 when Victory Gallop beat Favorite Trick in the Arkansas Derby. I was positive that the Elliot Walden trainee was going to go on and win the Triple Crown. Alas, Real Quiet and Bob Baffert ended that dream in the Derby when Victory Gallop finished second. The real reason to love Oaklawn Park nowadays is the full fields. A typical card carries 9 races. Out of the 9 races, it’s rare to find a race where there are less than 7 entrants. There was only one race, in fact, on Feb. 13 where only 7 horses ran. That race was Race 8. What’s interesting is that 5 of the 7 entrants were at morning lines of 9/5 to 6/1. So, even when there are less than 8 entrants, the races are competitive at Oaklawn. Competitive races are where horseplayers find overlays. 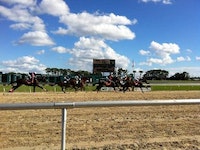 Tampa Bay Downs –Like Oaklawn, Tampa Bay Downs provides full fields. But, more so than Oaklawn, Tampa Bay tends to produce huge, massive pari-mutuel payouts. Out of the 10 races on Tampa Bay’s Feb. 13 card, 6 winners paid $10 or more to win. 4 of those winners paid $25 or more to win. The last 3 races on the card were extremely fruitful to long shot players. Voler Les Coeurs won Race 8 and paid $42.60. Aliquippa won Race 9 and paid $128 and Change Maker won Race 10 and paid $36.20. Tampa Bay also boasts an incredible jockey colony. Rosemary Homeister still rides at Tampa Bay. So does Ronald Allen Jr. who has been a staple at Tampa Bay for a while now. The man to watch, though, is Antonio Gallardo. Gallardo is winning races at 27% this year. He’s an incredible jockey who understands pace as well as anybody in the nation. It’s only a matter of time before Gallardo starts picking up mounts in some of the big stakes races at other tracks.

Fair Grounds in Louisiana – The Louisiana Fair Grounds is one of my favorite tracks in the United States. I’ve visited it multiple times and it’s a must for any horseplayer that loves the history of the sport. The Fair Grounds opened in 1852. It’s the place where almost every single Cajun jockey, Kent Desormeaux, Eddie Delahoussaye, Calvin Borel, Craig Perret and Shane Sellers, all perfected their craft. Robby Albarado still rides there along with Miguel Mena and James Graham. Rosie Napravnik’s career took off once she started riding at the Fair Grounds in 2010. The Louisiana Derby has become one of the top prep races for the Kentucky Derby since 1996 when D. Wayne Lukas’s Grindstone used it to prep for a victory over Bob Baffert’s Cavonnier in the Run for the Roses. The quality of trainers, jockeys and horses at the Fair Grounds is as close to the big tracks as you’re likely to find. Every horseplayer should consider putting the Fair Grounds onto the list of tracks on which they wager.