While thoroughbred racing fans are obviously excited about the prospect of seeing American Pharoah complete a Triple Crown sweep by capturing the Belmont Stakes on June 6, ending a 37-year drought of such a feat, standardbred racing fans are eagerly looking ahead to this Saturday's Art Rooney eliminations for three-year-old colt pacers. 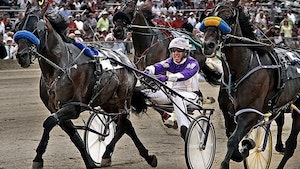 During the middle of the Saturday program at Yonkers, the New York half-mile oval will host a pair of $40,000 eliminations for the Art Rooney Stakes, with the lucrative final slated for the following weekend. The field from the rail out in the first elim reads Arque Hanover, Soto, Sonofa Sizzle, Betting Exchange, Cartoon Daddy and A Bettor Hat. The second group, carded as the seventh race, reads National Seelster, In The Arsenal, Rock N' Roll World, Bet You, Rollin Ring A Fire, Penji Hanover and Western Pioneer.

In the first elim, Cartoon Daddy (Yannick Gingras) will likely go postward as the favorite while starting from post five. This Ron Burke-trained son of Art Major won his seasonal debut at Tioga Downs last week as the even-money choice, following a solid freshman campaign in which he posted a 6-2-0 slate and $280,000 bankroll from 13 starts. He was very good early in his freshman season, but tailed off toward the end and his narrow victory against New York Sire Stakes foes last week at Tioga Downs hardly points to a stellar year ahead.

Just to his inside are two colts who will merit respect. Betting Exchange broke as the 3-2 favorite in a NYSS split last week at Tioga after being overmatched in his debut. But the Tom Fanning trainee did win three of seven starts and nearly $100,000 last year. Just to his inside in Sonofa Sizzle, who dominated Delaware-breds at Dover Downs in April and then suffered his first setback of the year while facing older rivals on Monday at Harrington. This Josh Green trainee could make his presence known in the elim and the final.

Then one race later in the second Art Rooney elim, expect In The Arsenal (Brian Sears) to go postward as the heavy favorite from post two. A talented sophomore son of American Ideal trained by Kelvin Harrison, In The Arsenal prevailed easily in 1:50 in his seasonal debut against NYSS company at Tioga Downs last week and looks poised for another solid campaign. Last year he won six of 11 starts and banked nearly $400,000, including stakes wins at Yonkers and Lexington's Red Mile where he took a lifetime mark of 1:49.4 that dwarfs anything his rivals have ever posted.

Looking to play the spoiler role in the elim are railbound National Seelster for trainer Chris Ryder, Bet You for trainer Jimmy Takter and Penji Hanover, who won three of 10 starts last year but was unlucky in the draw for his debut. Bet You posted a 2-6-2 slate and earned nearly $150,000 last year and competed in several lucrative stakes. He could be primed for a good effort in the elim and perhaps a better one in the final.
Racing
Loading...