Two huge three-year-old races over the weekend have, in my mind, put the division into perspective. There is no American Pharoah present in this current three-year-old crop. But that doesn't mean that there aren't any good three-year-olds that could turn into tough, hard-to-beat older horses either this fall, next year or beyond. As of today, there is only one horse that has a claim on three-year-old of the year, Exaggerator.

After Exaggerator, I have a feeling that the rest of my top five might surprise you.

Did Monmouth's racetrack come up muddy?  Sure, it did. Does Exaggerator love to race over the mud?  Of course, he does. It's hard to take anything away from the Keith Desormeaux trainee, though. Facing a talented field, Exaggerator skipped to an easy win by running past rival Nyquist and the Bob Baffert trained American Freedom. What was so impressive is that Exaggerator showed that he's bounced out of the bad run in the Belmont Stakes with no issues. That was my chief concern. He's at the top of this class right now.

Say what you want, but American Freedom ran Nyquist into the ground. Jockey Rafael Bejarano did the only thing that he could in the Haskell Invitational. That was one ridiculously fast first quarter-mile. The half was gotten in 46.62. What I really love about American Freedom's race in the Haskell Invitational this past Sunday was how he responded once Rafa got him to change leads. He actually accelerated in the stretch to chase home Exaggerator. That's the sign of a talented, tough horse. Am I giving the Baffert charge too much credit?  I don't think so.

Destin finished third in the Jim Dandy over the weekend. I know that a lot of hoseplayers and horse racing fans will disagree with me on this. I mean, how could Destin be first when Laoban and Governor Malibu both finished ahead of him?  I think that Javier Castellano, as great as he is, made a mistake aboard Destin by allowing Laoban to get such an easy lead. Different tactics may have won the race for Destin. He's still the horse that made all of the running in the Belmont Stakes only to lose by a nose to Creator. I think the Pletcher runner comes back big time in the Travers Stakes. 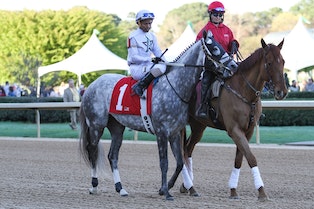 Here's another horse that I think deserves to be in the Top 5. Due to the pace, Creator had no shot at winning the Jim Dandy. There was just no way that he could make up ground after Laoban got away with such easy fractions. I don't think that Javier and Destin will let Laoban get away with those fractions in the Travers Stakes. You have to expect that American Freedom will show up at Saratoga for the Travers as well. If the pace is quick early in the Travers, Creator will have a shot.

The Derby winner was compromised by the pace. There was also a moment as they went around the turn when it looked like Nyquist might pull away from American Freedom. But, then, American Freedom is the horse that went on with it. If Nyquist had been taken off the rail and had tracked American Freedom instead of the other way around, he's the horse that may have finished second. I'm not sure if Nyquist wouldn't be better suited as a dirt miler like former Doug O'Neil great Goldencents. We'll see what Doug decides to do with the Derby winner. Don't be surprised if Nyquist ends up back in SoCal instead of heading to Saratoga for the Travers.