In the 50 years that the Bob Balfe Puppy Stakes has been running at Palm Beach, there have been some of the all time greats in the history of the sport that have won this thing.  All-Americans, record breakers and National Championship Finalists all got their careers started winning their first Stakes Title in this prestigious Final.

Who are the greatest of them all?  Here are our Top 5 Spring Puppy Stakes champs to ever run at "The Beach." 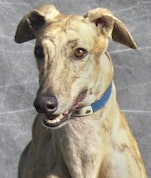 Simply one of the greatest racers in history. After winning his first Stakes Title in this Tournament, Ozzie went on a tear in 2005-2006 by ripping off 26 consecutive victories.  During the streak, Oz claimed the He's My Man Classic Title and went on to be the North American wins leaders with 51 trips to the winners circle that season.  Besides Pat C Rendezvous, this is the only greyhound that can make a claim for the top racer of all time in South Florida.

Palm Beach hadn't seem a storm like this in quite a while until this greyhound came rolling in.  One of the all time best rushers in the game outlasted his brother Juggernaut to win the Title in 2014 and just kept on going.  "Stormy" from owner Steve Schlachter claimed the 2015 He's My Man Title and was Runner-Up in  the BetAmerica National Championship to Husker Magic.  He ended his career by winning the $50,000 St Patricks Invitational in blowout fashion and getting All-America Honors as well. 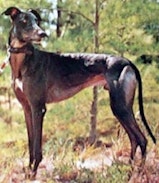 One of the first true superstars Palm Beach had dominated the early 70's by winning the Spring Puppy Stakes Title and receiving All-American honors in that same year. Head to head match-ups with All-American Izz A Champ is still to this day known as the track's most contested rivalry.

There's a reason why they named the prime time sprint title after this greyhound.  He's My Man caught fire in 1988, winning 32 of 40 races, including the Puppy Stakes Championship. "The Man" then proceeded to win the North American Wins Title, which was one of the only times a Palm Beach racer had ever won it. 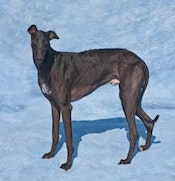 In the middle of Rader Racing's historic 11 straight Kennel Championship run, their young gun Conk Gonk captured this Title and became one of only a handful of others champs that went on to win the He's My Man Classic in their careers.  "Gonk" was a huge hit online as social media and chat rooms were becoming mainstream around the globe. 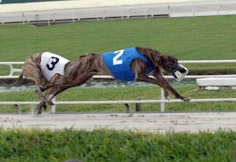