Every decade in thoroughbred racing has produced its share of top horses, jockeys and trainers. There are legends from every decade in the Sport of Kings. But, for some reason, the 1980's feels like the decade that really showed us training legends. Perhaps, it's because the 80's is the decade that came about right after the stunning 1970's that brought us 3 Triple Crown winners:  Secretariat, Seattle Slew and Affirmed. Or, maybe, it's because the 1980's was that transition period between the men that ruled the 60's and 70's and the men that would rule the 90's and 2000's.

Arguably the greatest trainer to ever condition a race horse, is there a superlative that doesn't describe D. Wayne?

He dominated the 1980's with 3 straight Eclipse Awards from 1985 through 1987. He won 3 Breeders Cup Races on a single day in 1988 with Open Mind, Is It True and Gulch. He also set a record in 1987 with 92 stakes winners. He won the Preakness in 1980 with Codex and the Kentucky Derby in 1988 with Winning Colors. But D. Wayne's greatest gift to horse racing might be that Todd Pletcher, George Weaver, Mike Maker, Dallas Stewart and Kiaran McLaughlin all studied under D. Wayne. 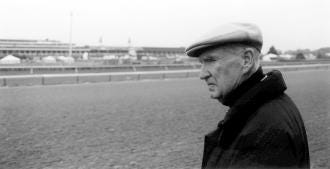 In the 1970's, he won 5 U.S. Champion Trainer by earnings titles from 1970 through 1973 and in 1975, Whittingham won an Eclipse Award in 1982 and in 1989. He won the 1986 Kentucky Derby and the 1987 Breeders Cup Classic with Ferdinand. In 1989, Whittingham stood on the doorstep of greatness when Sunday Silence went into the Belmont Stakes with a chance at winning the Triple Crown. Silence's top rival, Easy Goer, put an end to Whittingham's Triple Crown dreams.

If any horse racing fan wanted to put Stephens ahead of

Whittingham, they'd have every right to do so. Stephens' accomplishments are on par with Whittinghams, if they don't exceed Whittingham's outright. What's more impressive?  Winning 8 Santa Anita Handicaps and 8 Hollywood Gold Cups? Or, winning 6 straight Belmont Stakes, which is what Stephens did from 1982 through 1986? That's what Stephens did with the great Conquistador Cielo in 1982,  Caveat in 1983, Swale in 1984, whom Stephens also conditioned to a Kentucky Derby win in '84, Creme Fraiche in 1985 and Danzig Connection in 1986. For Stephens' other accomplishments, check out his page on the National Museum of Racing and Hall of Fame page.

Easy Goer lost to rival Sunday Silence in the Kentucky Derby and the Preakness Stakes before absolutely pummeling Silence in the Belmont Stakes. That's not all that Shug did during the 1980's, though. He won the Breeders Cup Distaff in 1988 with Personal Ensign, one of the greatest mares to ever run, the same year that he won an Eclipse Award for Outstanding Trainer. Shug won 2 Breeders Cup races in 1989, the Sprint with Dancing Spree and the Juvenile with Rhythmn. He also trained Orb to a Kentucky Derby victory in 2013, which tells horse racing fans Shug's still got it.

The Eclipse Award for Outstanding Trainer winner in 1984, Jack Van Berg is best known for saddling Alysheba, a son of Alydar, to victories in the Kentucky Derby and the Preakness in 1987. Alysheba would go on to win the Breeders Cup Classic in 1988 over Seeking the Gold. A year earlier, Alysheba had lost the BC Classic to 1986 Kentucky Derby winner Ferdinand in one of the great stretch duels in BC history. Van Berg trained more than just Alysheba in the 80's. He won the the 1984 Preakness Stakes and Super Derby with Gate Dancer. Van Berg entered the National Racing Hall of Fame in 1985.