The 1990's might be the decade that brought thoroughbred horse racing front and center into the minds of many fans. The Pacific Classic was first run in 1991. Three horses in a row:  Silver Charm in 1997, Real Quiet in 1998 and Charismatic in 1999, had a shot to win the Triple Crown while the first Dubai World Cup Festival of Racing was run in 1996. The decade of the 1990's will go down as one of the most important in thoroughbred racing history. Let's take a look at five of the top five conditioners from the great 1990's.

1. Bill Mott, July 29, 1953 - The brilliance of Bill Mott may start with Cigar in the 1990's, but it definitely didn't end there. Before getting to Cigar, it should be noted that
Mott saddled back-to-back Breeders Cup Distaff winners in Ajina in 1997 and Escena in 1998. Mott also trained Favorite Trick, who went undefeated in 1997 and not only took home two-year-old honors, but also Horse of the Year honors. The great Bill Mott trained Paradise Creek, who won the 1994 Arlington Million.

But it is Cigar that Bill Mott will ever be linked with. Cigar went 2 and 9 in his first 11 races before being transferred into Mott's care. After a couple of decent finishes in allowance races on the turf, Mott put Cigar on the dirt where he romped by 8 lengths in an allowance race at Aqueduct. That started a 16 race win streak, tying the great Citation, that included 10 Grade 1 wins, 11 including the Dubai World Cup in 1996, which doesn't appear to have been graded at the time. Ridden by Jerry Baily, Cigar went off 3/5 in the 1995 Breeders' Cup Classic. Who can forget Tom Durkin in 1995 saying, "The unconquerable, invincible, unbeatable Cigar!" as Mott's champion crossed the finish line?

the Sprint, in 1992 with Thirty Slews. It would take five more years before Baffert's genius really took hold. Silver Charm became one of the most popular races horses to ever run after winning the Kentucky Derby in 1997 over Captain Bodgit. Charm lost the Belmont Stakes but came back a year later to win the Dubai World Cup. 1998 might go down as one of the best years for any trainer in thoroughbred racing history. Not only did Baffert win the Dubai World Cup with Silver Charm, but he took home the Derby and the Preakness with Real Quiet. Silver Charm finished second to Awesome Again in the 1998 Breeders Cup Classic.

conditioners from the 1990's. Heck, many could argue that he should be number one on the list. D. Wayne won three Kentucky Derbies during the decade:  Thunder Gulch in 1995, Grindstone in 1996 and Charismatic in 1999. He Almost won the Triple Crown with Charismatic who finished third in the 1999 Belmont Stakes. He won the Preakness and Belmont in 1994 with Tabasco Cat and he won the Preakness in 1995 with Timber Country and the Belmont in 1995 with Thunder Gulch. The man upset the Breeders' Cup Classic in 1999 with Cat Thief, who had finished third to Charismatic and Menifee in the 1999 Kentucky Derby. D. Wayne rocked it out in the 1990's.

4. Richard Mandella, Nov. 5, 1950 - Some might argue that Mandella doesn't even belong on the list. Maybe, I've got a West Coast bias, but I remember the 1990's and what I remember is Mandella taking down 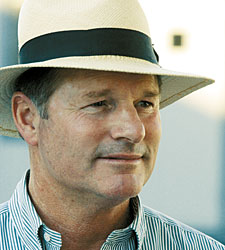 ridiculous scores at both Hollywood Park and Santa Anita on a weekly basis. Mandella trained three horses from South America that have gone down in SoCal Racing lore in Siphon, Gentleman and Sandpit. Siphon finished second to Singspiel in the 1997 Dubai World Cup and second to Gentleman in the 1997 Pacific Classic. Also in 1997, Gentleman beat 1996 Breeders' Cup champion Alphabet Soup in the San Antonio Handicap. In 1996 Siphon won the Hollywood Gold Cup. Sandpit finished second in the 1997 Arlington Million to Marlin while Gentleman won the Pimlico Special, the Hollywood Gold Cup and the Pacific Classic in 1997. Also in 1997, Mandella's South American horses finished first, second and third in the Big 'Cap when Siphon beat Sandpit and Gentleman.

5. Nick Zito, Feb. 6, 1948 - Along with D. Wayne and Bob Baffert, Nick Zito owned the Triple Crown races in the 1990's. The man was as good, and sometimes still is, as Baffert and D. Wayne at getting a two-year-old ready for a Triple Crown campaign. He won the Kentucky Derby in 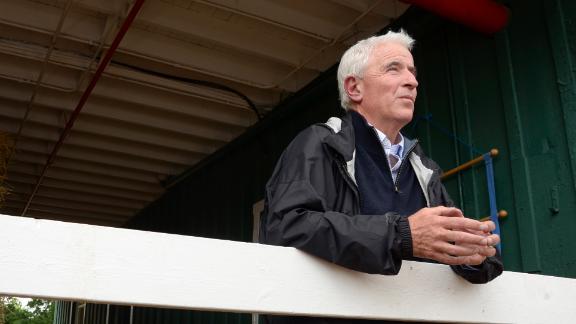 1991 with Strike the Gold. Then, in 1994, he upset Holy Bull to take home the Kentucky Derby with Go for Gin. Zito also trained Louis Quatorze who not only won the 1996 Preakness Stakes but also finished second to Alphabet Soup and in front of Cigar in the 1996 Breeders' Cup Classic. Zito still works his three-year-old magic from time to time. D'Tara ended Big Brown's Triple Crown bid in the Belmont Stakes in 2008 while Birdstone ended Smarty Jones' Triple Crown bid in the Belmont in 2005. Luckily for Bob Baffert and American Pharoah, Zito didn't run a horse in the 2015 Belmont Stakes.