Top 5 Horses that Never Ran in the Kentucky Derby

For all of the attention given to the Kentucky Derby, it’s rare that the horse that wins it goes on to become a great thoroughbred. California Chrome, who took home the Run for the Roses in 2014, might be the exception although if he continues to face off against Shared Belief, he’s likely to retire as one of those horses that just “wasn’t the same as a four-year-old as he was as a three-year-old”.  Think about it.  Most Kentucky Derby winners get retired to stud, like Street Sense, way too soon to go on to greatness. Others, like Mine That Bird and Giacomo, got lucky winning the Derby and still others, like Charismatic and I’ll Have Another, end up being retired after an injury.

Some horses don’t even make it to the Kentucky Derby. Late-bloomers, like all of the horses on this list, often times aren’t mature enough to take home the trophy from a Triple Crown race. Instead, late-bloomers end up becoming awesome runners later in the year or later on in their careers.

It was difficult to come up with this particular list. I’m sure that there are a few that I’ve left off, and I’m positive that any horseplayer that reads this will have is or her own opinion. Also, I’m only going back around 20 years or so. That’s what’s so great about the Sport of Kings, isn’t it? If we didn’t have our own opinions, we wouldn’t be horseplayers.

Top 5 Horses that Never Ran in the Kentucky Derby

1. Tiznow – Tiznow didn’t even run in a Triple Crown race during 2000, his three-year-old season. His first signature win was the G3 Affirmed Handicap at Hollywood Park and he paid $23.60 to win it. I vividly remember the race because I was in Las Vegas in July, contemplating whether or not to put money on the ill-fated Dubai Millenium at 2 to 1 to win the Breeders' Cup Classic. I thought Dixie Union was going to pummel Tiznow.

After the Affirmed victory and a second in the Pacific Classic, Tiznow went on to beat Giant’s Causeway and Fusaichi Pegasus, the 2000 Kentucky Derby champ, in the Breeders’ Cup Classic during his three-year-old season. As a four-year-old, he defended his BC Classic title in 2001 after being headed by Sahkee, Godolphin’s prized runner. Tiznow remains the only horse to ever win the Breeders' Cup Classic twice. 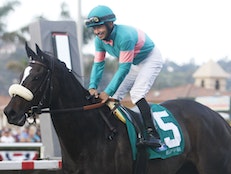 2. Zenyatta – The great filly gets the nod over Cigar for me because she won the Breeders' Cup Classic in 2009 and lost it by only a head to Blame in 2010. She also bested Cigar by a single race when winning 17 in a row to Cigar’s 16. If any other jockey had been on Blame that day instead of the awesome Garrett Gomez, Mike Smith might have gotten her past Blame. By the way, please start riding again, Garrett. You really are a special jockey.

Okay, how good was Zenyatta? If you really don’t know, you can’t call yourself a horseplayer until you brush up on your thoroughbred history. She was as special as any race horse I’ve ever seen run live, that’s for sure. Zenyatta won only two races as a three-year-old. She didn’t even run in her first race until November of 2007.

3. Cigar – The brilliant Cigar didn’t even run for Bill Mott during his three-year-old season. He was under the care of Alex Hassinger, Jr. who started the son of Palace Music nine times during his three-year-old season where he won twice. Under Mott’s care, Cigar won the Dubai World Cup and the Breeders' Cup Classic. He was also named Horse of the Year twice, in 1995 and 1996. Oh, yes, there’s that 16 race win streak that makes him great as well. Cigar just passed away in October of 2014.

4. Ghostzapper – The Bobby Frankel trainee’s signature win as a three-year-old was in the 2003 G1 Vosburgh Stakes, a sprint race. Frankel wasn’t even sure if Ghostzapper would develop into a route runner until he pummeled his opponents in the 2004 Phillip E. Iselin Handicap at Monmouth Park. Up until then, Frankel thought he was a sprinter. Ghostzapper’s performance in the 2004 Breeders' Cup Classic remains one of the greatest of all time. He broke the Classic and track record when beating Roses in May in 1:59.02. 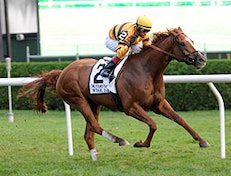 5. Wise Dan – I had planned on keeping all turf horses off the list, but then I suddenly remembered that the two time Horse of the Year is also extremely capable on dirt. Wise Dan won the Grade 3 Phoenix Stakes over the turf at Keeneland in his three-year-old season, 2010. He finished sixth in the BC Turf Sprint behind Big Drama at 8 to 1 odds.

In his four-year-old season, though, Wise Dan blossomed into a gifted horse by beating Flat Out, the Jockey Club Gold Cup winner, and Ruler on Ice, the Belmont Stakes winner, in the Grade 1 Clark Handicap on dirt. The rest should sound familiar to horseplayers. In 2012, Wise Dan beat Animal Kingdom, the 2010 Kentucky Derby champion, in the BC Mile over turf. He repeated his BC Mile victory in 2013. The Charles Lopresti trainee won Horse of the Year in both 2012 and 2013.