Check out my Top 5 Turf Horses heading into the summer.

I love how this Chad Brown trainee won the Gulfstream Park Handicap on the lead.  Then, I liked how he lied in 7th position, about 4.5 lengths behind the leaders, at the second call in a $100,000 optional claimer in his last. Brown used that race, which Almaanar won, as a prep for some summer take downs.

This guy's the real deal. Turf horses that can both win on the lead, or win from off the pace, are difficult to deal with. The fact that Chad Brown trains Almaanar makes him even that much more dangerous. 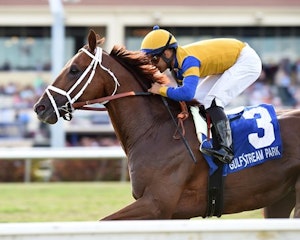 The main reason is because he had every right to pack it in after quality closers Sadler's Joy and Call Provision rushed up to him. He didn't. He kept his mind on business. To me, that's the sign of a top notch horse.

Pletcher placed him in the Grade 1 Manahattan. He couldn't hold off Sadler's Joy. Neither Sadler's Joy, nor Hi Happy could hold off Spring Quality. The third place finish in the Manhattan doesn't bother me at all. He had every right for a slight regression after winning the Grade 2 Pan American and the Grade 1 Man O'War.

He showed a ton of guts battling Beach Patrol to the wire first in the Grade 1 Turf Classic in his last. It was a breakout performance for Yoshida. When trainer Bill Mott gets them running well, they often continue to run well.

He ran awfully close to a .44 half-mile in the Grade 3 Poker. All he did was take the lead near the top of the stretch and then hold off a quality closer like Made You Look. The Grade 3 Poker was deep.  Ballagh Rocks, Force the Pass, Made You Look, Voodoo Song, and Fireaway all ran in the race. Sure, he could regress, but the win was fantastic. He's definitely one to watch.

He's got some quality. A horse that finishes second in 2 Grade 1 races, 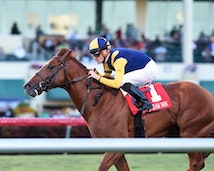 like Sadler's Joy has done in his last couple of races, has quality. This is especially true if the second place finishes happen on the turf. However, let's not kid ourselves. Sadler's Joy tends to bump up for second, or third. He doesn't win a lot of races at the Grade 2 and Grade 1 level.

Still, he's right there in every race. That means he not only gets on my list, but might be the safest key horse in this summer's huge Grade 1 turf events at The Spa.