The 1980’s was a boon decade for horse racing. The decade of British Pop, Wall Street, the Cold War, and Reaganomics, produced some of the greatest racehorses in the history of the Sport of Kings. Starting with the awesome Spectacular Bid in 1980, John Henry, Spend a Buck, Lady’s Secret, Alysheba, Ferdinand and Sunday Silence all won Eclipse Awards for Horse of the Year in the 1980’s.

The jockeys weren’t too bad in the 80’s either. The decade turned out to be a transition one for riders. The greats from the 1970’s won Eclipse Awards in the 1980’s and then passed the torch to riders in the 1990’s. In this first of a three-part series, we take a look at the Top Jockey’s from the Decade of Big Hair. 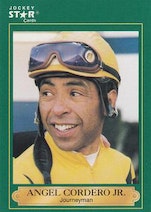 Angel Cordero Jr. – Surprised at number one on the list? Don’t be! Even though some of the others on this list, in particular Pat Day and Lafitt Pincay Jr. are probably better known to today’s racing fans, the man that dominated the 1980’s is Angel Cordero Jr. He’s easily one of the top jockeys to ever live. Cordero Jr. cemented his legend in the 80’s when he won two Preakness Stakes aboard Codex in 1980 and Gate Dancer in 1984 and a Kentucky Derby aboard Spend a Buck in 1985. He won two Eclipse Awards in 1982 and 1983 and four Breeders' Cup races.  The interesting thing about Cordero Jr. is that he started out as a bettor and was widely hated according to this article that Steven Crist wrote for the New York Times. Today he remains in racing as a jockey agent. His most famous client is JohnVelasquez. 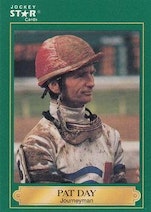 Pat Day – The 1980’s were good for Mr. Day. Day won three Eclipse Awards in the 1980’s for outstanding jockey. He won in 1984, 1986 and 1987. The religious Day won the Preakness aboard Tank’s Prospect in 1985 and the Belmont aboard Easy Goer in 1989. Day piloted Wild Again to a victory in the inaugural Breeders’ Cup Classic in 1984.  Day’s very religious. He actually did an interview with the Christian Broadcasting Network.  It’s one of the first things that come up about Pat Day after a Google search. Day insists that Easy Goer was the best horse that he ever rode. 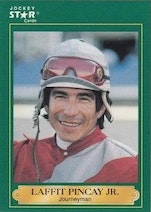 Lafitt Pincay Jr. – Sure, Lafitt dominated the 1970’s, but his 1980’s wasn’t that bad of a decade either. Arguably the greatest jockey of all time, Lafitt dominated in the Triple Crown races and the Breeders’ Cup during the 1980’s. He won the Belmont three times in a row from 1982 to 1984 with Conquistador Cielo, Caveat and Swale. Pincay Jr. also won the 1984 Kentucky Derby aboard Swale and he took home the Eclipse Award for Outstanding Jockey in 1985. In 1999, Pincay Jr. overtook Bill Shoemaker as the winningest jockey in history aboard Irish Nip. Russell Baze eventually broke Laffit’s record in 2006.  Many believe that Pincay Jr. is the greatest jockey to ever ride on a thoroughbred. The Pincay Family is still involved in racing. Lafitt Pincay III is a racing analyst while Pincay Jr. can be seen often enjoying the day at Santa Anita Park. 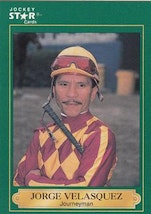 Jorge Velasquez – Velasquez won the Carter Handicap in 1968 and he dominated during the 1970’s, but his 1980’s wasn’t a bad decade. A lot of his success in the decade had to do with 1981 Kentucky Derby and Preakness winner Pleasant Colony who finished third in the Belmont. Velasquez also won two Breeders Cup races in the 1980’s, aboard Twilight Ridge in the 1985 BC Juvenile Fillies and aboard Proud Truth in the 1985 Breeders’ Cup Classic. Velasquez is the jockey that struggled aboard Alydar in his rivalry with Affirmed in the 1978 Triple Crown. Check out a video from YouTube of the 1978 Belmont Stakes. No matter what Velasquez tried to do, he couldn’t get Alydar to correctly switch leads in the stretch. Alydar’s inability to take advantage of that small bit of acceleration that comes from switching leads is what led to the horse’s failures versus Affirmed. 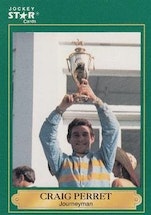 Craig Perret – One can easily go with Jacinto Vasquez in the fifth spot but I decided to go with Perret. Craig Perret won the Eclipse Award for Outstanding Jockey in 1990 at the tail end of the 80’s. The horse that made his year was Unbridled, whom Perret rode to a victory in the 1990 Kentucky Derby. I can’t imagine any horseplayer in the United States born before 1980 forgetting Carl Nafzger’s play by play to Unbridled’s owner Frances Genter during the stretch of the Run for the Roses in 1990.  In 1987, Perret won the Belmont aboard Bet Twice. He also finished second in the Derby and second in the Preakness aboard Bet Twice. Perret won two Breeders’ Cup races in the 1980’s. The first was aboard Eillo in the 1984 BC Sprint. The second was aboard Rhythm in the 1989 BC Juvenile. Since retiring from racing in 2005, Craig Perret has kept a low-profile. He’s been working with young horses and getting them ready for sale at Spring Meadows.