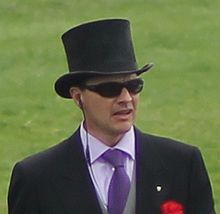 The great Aidan O'Brien may not be as well known to American horseplayers as he is to horseplayers in other nations. Make no mistake, O'Brien is the most famous horse trainer in the rest of the world. He trained Found to a win in the Breeders' Cup Turf last year. He also trained Hit It A Bomb to a win over Airoforce in the 2015 BC Juvenile Turf. O'Brien trains for the leading thoroughbred owners John Magnier, Sue Magnier, Michael Tabor and Derrick Smith (who also own the hugely successful Coolmore breeding operation) and trains at Ballydoyle Stables near Cashel, County Tipperary, Ireland. This year, O'Brien will brings 11 horses to the 2016 Breeders' Cup at Santa Anita, a round-trip of more than 10,000 miles!

Check out some of Aidan O'Brien's top Breeders' Cup horses over the years:

Easily the most famous of all of Aidan O'Brien's trained horses, Giant's Causeway almost pulled off a win in the 2000 Breeders' Cup Classic. Unfortunately, he faced one of the best horses that I've ever seen run up close in Tiznow. If Tiznow hadn't been in the the 2000 Classic, Causeway would have won it. He's become one of the most important stud horses in the industry.

Former jockey Joeseph O'Brien rode St. Nicholas Abbey for his father Aidan to a win in the 2011 Breeders' Cup Turf. St. Nicholas Abbey went off at 6/1 to win the BC Turf that day. It was an upset based on the odds, but nobody was surprised that O'Brien had saddled yet another winner in the BC Turf. Joey O'Brien announced just this year that  he was going to concentrate on his training career and that he would no longer ride horses as a jockey.

What's in store for Aidan O'Brien in the 2016 Breeders' Cup?  Check out a list of all of the horses that O'Brien's bringing to this year's Breeders' Cup: