The 2015 Quarter Horse racing season at Delta Downs will conclude on Saturday, July 11 and it’s a safe bet that trainer Kenneth Roberts, Sr. will pick up his seventh leading training title at the Vinton, Louisiana racetrack.

The 52-year-old realized at a very early age that working with horses would be his life calling. He was a high school athlete in Houston, Texas, but basketball and football soon took a back seat to training Quarter Horses.

He saddled his first racehorse 38 years ago, and made a slow, but steady rise to the elite level of his profession. He and his staff oversee a barn of 50 runners, with another 25 on his farm. Hard work and a dedicated team of owners, jockeys and stable hands are key ingredients to his success on the racetrack.

Through his career, Roberts has saddled over 13,000 horses and has a long list of champions and multiple stakes winners.

Roberts attends many sales, including the annual LQHBA Yearling Sale and plays a pivotal role in spotting potential  stars for his owners. When evaluating yearlings, he looks over the prospect from head to toe, studying them with an intense scrutiny.  One of his most successful sale purchases was Ol Time Preacher Man, who Roberts selected at the 2012 LQHBA Yearling  Sale.  He made the winning bid of $20,000 for his owner TM Ranch. The next year, the sorrel gelding by Heza Fast Dash was victorious in the $1 million LQHBA Breeders’ Futurity (RG1) at Evangeline Downs. He has far exceeded his purchase price with career earnings of $565, 933. 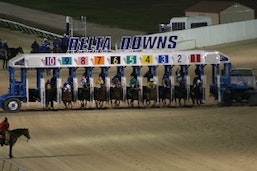 Currently running at Delta Downs, Roberts has become an icon at the Louisiana track, where he won 50 races last year to take his third consecutive training title, and sixth overall. He will be prominent on their closing night as he has qualifiers for both the $634,000 Lee Berwick Futurity and $217,000 Delta Downs Derby.

Next up will be the annual Quarter Horse meet at Fair Grounds in New Orleans, which begins on August 15 and then onto Evangeline Downs in Opelousas, Louisiana.

Roberts is one of many successful horsemen running in Louisiana. With four race meets solely dedicated to Quarter Horse racing, it is an excellent circuit to follow.

Check out the Louisiana Quarter Horse Breeders Association website for information on upcoming race dates and other information.
Racing
Loading...