Trials for Saturday at Louisiana Downs 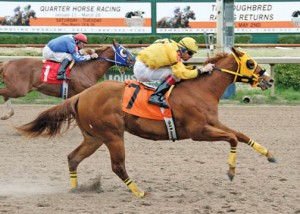 Trials for the first official futurity of the year, the Mardi Gras Futurity (RG2) at Louisiana Downs will take place on Saturday, February 20.

A total of 116 Louisiana-bred 2-year-olds will make their debut in 12 trials, with the ten fastest qualifiers advancing to the March 12 final. Several did compete in training races, including RDD Lajollanfastdash, a 3 1/4-length training race winner over the track on January 29 Jockey Raul Ramirez Jr. will ride RDD Lajollafastndash for trainer Willie Simien Jr.  Other schooling race winners are Chocolatebyelajolla, who will be ridden by Mario and Mallards Runaway Too.

Trainers to watch include Trey Ellis, Michael Taylor, Martin Trejo and Miguel Rodriguez, who has won two previous editions of the Mardi Gras Futurity. Rodriguez won the $281,514 Mardi Gras Futurity last March with Hemps Jumpn Lajolla, a 2-year-old son of Jumpn that he purchased for $7,200 at the 2013 LQHBA Yearling Sale.

He used a flipping rig in Hemps Jumpn Lajolla's trial, and his horse left better, running second. Raul Ramirez, Jr. had the mount in the final of the Mardi Gras Futurity.

"In the final, he just flew out of the gate," said Rodriguez of his lucrative maiden-breaking score.

Owner/trainer Rodriguez received a check for $126,681 and racing fans who noted the improvement of Hemps Jumpn Lajolla cashed a win ticket for $25.80.