Trials for the Los Alamitos $2 Million Futurity Set for Sunday

A big night of racing is on tap Sunday, November 22 at Los Alamitos as 11 trials are set for the Los Alamitos Two Million Futurity (G1). A total of 89 juveniles are entered with just the ten fastest qualifiers advancing to the very rich final.

Jess a Pollitician under top California rider Cruz Mendez is the morning-line choice in the first trial. Throughout the evening, major futurity winners Little Talks, Walk Thru Crystal, Ima Fearless Hero, and Phoebes Dynasty plus All American Futurity finalist Crooked Path will compete in the 400 yard trials.

Walk Thru Crystal, the very talented filly, who won the Kindergarten and Ed Burke Million, runs in the third trial. The California-bred will be ridden by Jesus Ayala.

In the sixth trial, two of the top 2-year-olds will face off. Little Talks and Docs Best Card, who were the first and second place finishers in the $1,049,000 Golden State Million Futurity on November 1, will renew their rivalry. 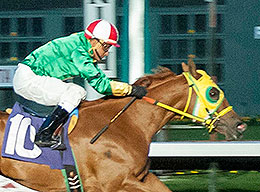 Walk Thru Crystal to Run Sunday Night at Los Al

Post time for Sunday's card is 5:00 p.m. (PT). The ten fastest qualifiers in the 400-yard trials will return to Los Alamitos for the final on Sunday, December 14. The winner's share of the Los Alamitos Two Million is $801,433, the second highest payout for a Quarter Horse futurity in 2015. Jess Good Candy, the winner of the $3 million All American Futurity at Ruidoso Downs earned $1.5 million on Labor Day.
Racing
Loading...