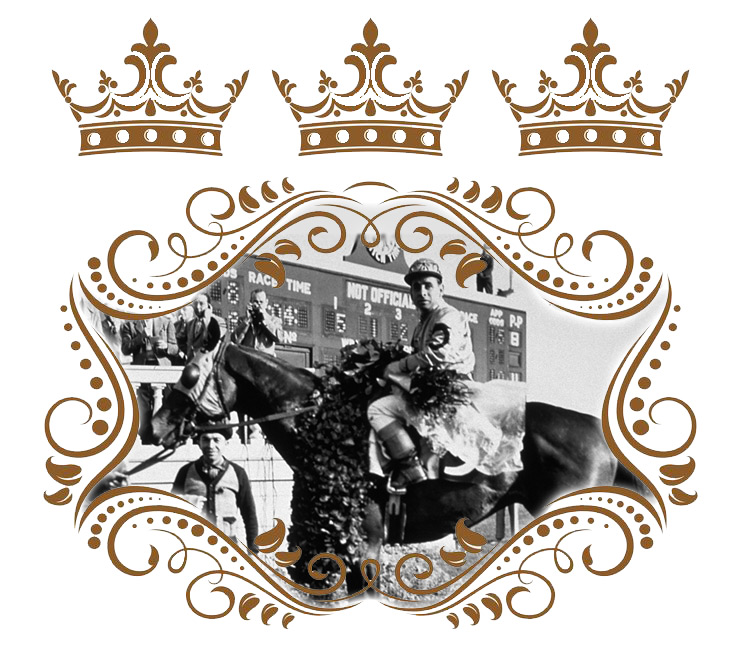 Brilliance can be fleeting. The career of the great Count Fleet spanned barely more than a year, from June 1, 1942 through June 5, 1943. But during his brief foray at the races, Count Fleet demonstrated the sheer speed, talent, and stamina of a genuine superstar.

Though speed was Count Fleet’s forte, sprinting wasn’t really his game. As a juvenile he was slow to develop; he frequently found himself rushed off his feet by early-maturing rivals capable of securing clear leads before Count Fleet could settle into stride. From his first 11 starts, all sprints, Count Fleet’s only stakes win came in the minor Wakefield S., and he was beaten in both the Washington Park Futurity and the Belmont Futurity.

But once Count Fleet stretched out over a mile, he became an unstoppable winning machine. Maturity worked its wonders, and the brown colt won his remaining 10 races by a minimum of three lengths, never giving his rivals a chance to challenge while routinely prevailing in gate-to-wire fashion.

Count Fleet first signaled his newfound brilliance with a powerful six-length score in the Champagne S. By stopping the clock in a blistering 1:34 4/5, Count Fleet recorded the fastest mile ever run by a 2-year-old to that point in time. But he was just getting warmed up. An easy allowance win preceded a five-length score in the Pimlico Futurity and an absolute blowout in the Walden S., in which Count Fleet trounced his rivals by 30 lengths.

Voted champion 2-year-old male of 1942, Count Fleet returned better than ever as a 3-year-old. The only drama came after Count Fleet easily won an allowance race and the Wood Memorial to warm up for the Kentucky Derby. He emerged from the Wood Memorial with a significant cut on his left hind leg, which threatened his participation in the Run for the Roses. But the wound healed sufficiently for Count Fleet to compete on the first Saturday in May, and the colt promptly dismissed all concerns with a resounding 3 1/2-length victory.

The remainder of Count Fleet’s spring campaign was little more than a coronation. He won the Preakness by eight lengths without ever being asked for his best, crushed the Withers S. by five lengths, and obliterated two overmatched rivals by 25 lengths in the Belmont Stakes. There was no need for Count Fleet to run his fastest in the Belmont, yet he still flew to the finish line in 2:28 1/5, breaking the stakes record.

Unfortunately, Count Fleet suffered an injury during the running of the Belmont, and while efforts were made to bring him back as a 4-year-old, he ultimately retired without racing again. At stud he was a rousing success, counting 1951 Kentucky Derby winner Count Turf, 1951 Belmont Stakes winner Counterpoint, and 1952 Horse of the Year One Count among his most successful runners.

Count Fleet was inducted into the National Museum of Racing’s Hall of Fame in 1961 and lived to the ripe old age of 33. Some Triple Crown champions won more races, or more money. Others claimed more championship titles, or ran faster times. But you’d be hard-pressed to find another Triple Crown winner as purely brilliant as Count Fleet.