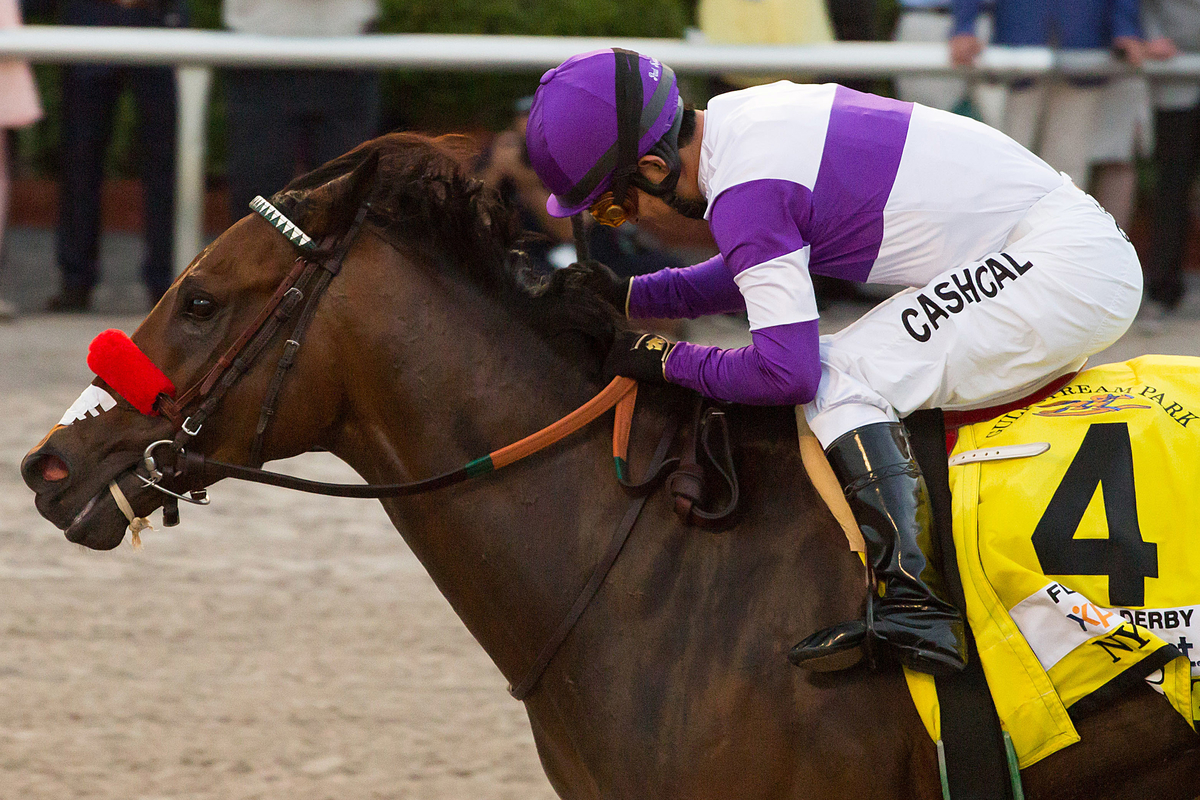 I was sitting amongst 500 and some odd players at the Horse Player World Series when the Florida Derby went off. Couldn’t hear Larry Collmus over the screaming as Nyquist buried his opponents including Mohaymen who finished a non-descript 4th. I remember thinking to myself “there’s a wow performance, clearly everyone will be impressed with that.” Then I signed onto twitter. People were immediately critical of Nyquist saying he was lugging out, was tired, didn’t run straight etc. (I’m looking at you Lyin Doug!) There were plenty of positive comments as well but I think I just noticed the Debbie Downer comments more. Mohaymen was a no show when they turned for home. There were no excuses given other than “he didn’t handle the track” which is trainer code for ‘we got beat bad.’ Nyquist faced some early pressure and was in between horses for much of the race so I found his effort particularly inspiring. He’s shown he can rally off the pace and shown tactical speed. At this stage he’s a deserving favorite in the Kentucky Derby, which means many handicappers will completely toss him, cause it’s the Derby and value is the name of the game. I still maintain it’ll be a price horse that wins in Kentucky.

Oscar Nominated won the 50 points and $300k that the Spiral Stakes offered to the winner. I’d honestly never heard of him until he hit the wire first on Saturday, but instantly recognized those silks. Ken Ramsey seems like a love him or hate him kind of guy, which in racing is a good thing. The more polarizing characters the better. He said after the race he’d be looking for a partner to split the $200,000 late nomination fee to get this horse in the Derby. But he’ll go to the Kentucky Derby. It’s Ken Ramsey, he would never not go to the Derby. But I can’t foresee Oscar Nominated taking home the golden statue. Sorry Ken.

I’ve never considered myself a reporter of any kind even though I’ve written or talked about racing for ten years now. But I noticed this weekend that there was essentially ZERO media at the Horse Player World Series this year. So that left me, your intrepid BARN host with the duty of reporting the important issues. Like what type of donuts were available, how dry the fried chicken was, how many collared polo shorts there were in one room. But after the final race crossed we all dashed up to the front table to see the results. Dan Kaplan was atop the standings but he didn’t look to excited about it. I asked him “Dan what’s up?” He said “well I think they added it up wrong cause John (Connelly) said he had that last place horse which should have jumped him over me.” Well people milled around and the tournament folks started recounting the numbers. Turned out John Connelly (who finished 2nd and 3rd) had made that play on his 3rd place ticket and not his 2nd place ticket. I was watching him as I saw him realize it and he said “I made a mistake.” It was kind of heartbreaking but hopefully he’ll be consoled with the $170 grand he got to take home. I spoke with Dan for a while Saturday and he’ll be on the BARN on Tuesday and he was gracious and seems like a really good dude and an avid horseplayer. Love seeing him win.
Racing
Loading...