Now that the Hollywood Park Turf Festival has concluded, the stakes action returns to dirt with the G1 Hollywood Starlet for two year old fillies and the G2 Bayakoa for fillies and mares three years old and upward.  Both races will be contested at that distance of a mile and a sixteenth.

In the Hollywood Starlet, the morning line favorite is Rosalind. The Ken McPeek trained daughter of Broken Vow, despite an awkward start ,closed fast to be third in the G1 BC Juvenile Fillies last out.  She will be ridden again by Joel Rosario, who won four races at Hollywood on Thursday.  She returns on Lasix, which she was not allowed to run on in the Breeders Cup. She also returns to race on an artificial surface. 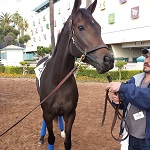 Rosalind's lack of early speed could be her downfall here.  With Be Proud and Untapable expected to set solid fractions, race could set up to whomever makes the first move.  That will be either Taste Like Candy or Arethusa.  Taste Like Candy was an impressive maiden winner in her career debut going 5 1/2 furlongs.  She makes her route and stakes debut here and retains Bejarano. Arethusa broke her maiden with an impressive 8 1/4 length victory in Sharp Cat Stakes last out.  Taste Like Candy should go off higher than her 7-2 morning line and should be the play here.

Bob Baffert called an audible last week when he decided not to send Fiftyshadesofhay to Aqueduct for the G3 Comely.  She is entered here and is the 9-5 favorite in the Bayakoa. She looks very tough to beat.  She will probably stalk pacesetting Broken Sword. Once she is asked for run, she should draw off for the victory.  Charm the Maker, winner of the restricted Adoration Stakes two back in her last start on dirt, should complete the exacta.

The feature race is the $200,000 Claiming Crown Jewel, run at a mile and an eighth for three year olds and upward which have started for a claiming price of $35,000 or less since January 1, 2012.  Bernie the Maestro won the Claiming Crown Rapid Transit at seven furlongs last year.  In his last start, he comes off a victory in the Schaefer  Memorial in the slop at Indiana downs in October.  He has won his last three starts going two turns.  He is trained by Mike Maker and owned by Ken and Sarah Ramsey.  That combo won four races in the Claiming Crown last year. Dominant Jeannes made a middle move to gain the lead before tiring to second in this race last year.  He should complete the exacta here.

The $125,000 Claiming Crown Tiara is for fillies and mares three years old and upward which have started for a claiming price of $25,000 or less since January 1, 2012.  The race will be run at 1 1/16 miles on the turf.  It seems to be a race filled with early speed.  Morning line favorite Deanaallen'skitten comes from the Chad Brown barn and looks tough to beat, but we will take a shot against her with Grandma's Rules. The Richard Scherer trainee was a stakes winner in two of her last three starts.  She can run close or further back off the pace.  Ridden by underrated jockey Joe Rocco Jr., She could be good value in this spot.