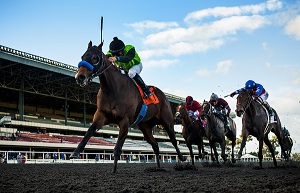 The road to the Kentucky Oaks continues at Santa Anita with the Grade 1, $300,000, Las Virgenes.  The one mile race for three year old fillies would give the winner 50 points towards entry for the Kentucky Oaks Championship Series.

The morning line favorite is Streaming.  The Bob Baffert trainee has been working lights out after winning the Grade 1 Hollywood Starlet.  She cuts back and distance and will break from the outside post 8.  She has good tactical speed and does not need to be close to the pace like she was in the Starlet. Martin Garcia will ride her again.

Her main competition figures to be Taste Like Candy.  From the barn of the red hot Jerry Hollendorfer, she has finished second in stakes in both starts since breaking her maiden in her career debut.  Rafael Bejarano retains the mount.

Following the Las Virgenes will be the Grade 2, $200,000, Arcadia Stakes.  The horse to look out for here is Suggestive Boy.  The Ron Mcanally trainee won this race last year and then followed that with a victory in the Grade 1 Frank Kilroe.  He makes his first start since then but if anyone can get a horse to win a stakes off a layoff, it is Hall of Fame trainer McAnally.

Stakes action returns to Tampa Bay headlined by the Grade 3, $200,000, Sam F. Davis Stakes at 1 1/16th miles.  While this race was surprisingly removed from the Kentucky Derby points schedule this year, it is still an important prep for the Tampa Bay Derby which will be run on March 8.

Wesley Ward sends out Noble Cornerstone.  The New York bred gelding by Noble Causeway comes off a second place finish in Remington Springboard Mile Stakes when adding Lasix.  He removes the blinkers for this race and is scheduled to be ridden by Hall of Fame jockey Kent Desormeaux.  But pay attention to what Desormeaux does as he is also named to ride Unbridled’s Note for Steve Asmussen in the Arcadia at Santa Anita.

There has been plenty of rain in Florida recently but hopefully the turf course will be in good shape for the Grade 3, $150,000, Lambholm South Tampa Bay Stakes at 1 1/16 miles.  The morning line favorite is Salto from the Todd Pletcher barn. He comes off a second place finish to Mr. Online in the El Prado Stakes on yielding turf. He has good tactical speed and should make first run for the lead when the pacesetters start to tire.

The $100,000, Suncoast stakes will be run at 1 mile in 40 yards for three year old fillies.  The morning line favorite is Comme Chez Soi. The Michael Matz trainee just missed by a nose at Gulfstream Park last out.  Both of her career starts have been at a mile but she will be making her two turn debut.  Her main competition figures to be Please Explain, who was an impressive maiden winner at Gulfstream last out.

Huge week of sports continues in New York and racing is a major part of that.  Four stakes will be run at Aqueduct with this feature being the Grade 3, $250,000, Withers Stakes at 1 1/16 miles.  The winner will receive 10 points for the Kentucky Derby championship series.

Uncle Sigh comes off a 14 ½ length maiden victory versus New York breds and has been installed the 9 to 5 favorite in the Withers by line maker Eric Donovan.  Gary Contessa trainee showed improved early speed in his maiden win.  He drew the rail and should be on the close to the peace versus these. Owned in part by Chip McEwen’s Wounded Warrior Stables, who donates 10 percent of the stables earnings to charities that benefit wounded or ill war veterans, Uncle Sigh is ridden by regular rider Pablo Morales.

The Lisa Guerrero trained Classic Giacnroll finished second to Noble Moon in the Grade 2 Jerome when making his two turn debut last out.  He should improve off that effort and will be ridden by Cornelio Velasquez for the first time.  The maiden Scotland ran third in the Jerome.  He comes back here while working bullets at Fair Hill. Kendrick Carmouche ships in from Florida to ride the Tony Dutrow trainee.

The $100,000, Busher Stakes for three year old fillies drew an evenly matched field of nine. The winner will receive 10 points for the Kentucky Oaks Championship Series.  The morning line favorite is Ballylee.  She comes off an impressive maiden victory going a mile and 70 yards on December 22.  Fleet of Gold finished third to lone speed Fierce Boots in the Busanda last out.  She should get a better pace to close into here.