Samraat vs. Uncle Sigh - The Rematch 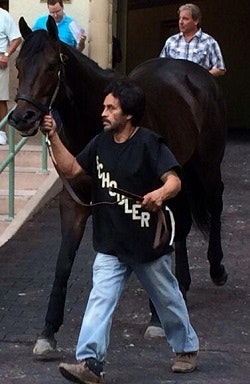 At Gulfstream Park we will have the 32nd running of the Grade 2, $200,000, Swale stakes at 7 furlongs. This race will feature the seasonal debut of Grade 1 Champagne Stakes winner Havana. The Todd Pletcher trainee has been working very well for this spot and all reports indicate he looks bigger and stronger than last year. His main competition figures to come from No Nay Never from the Wesley Ward barn and Can't Stop the Kid from the Donna Green barn. No Nay Never has not run since winning the Group 1 Darley Prix Morny at Deauville in August. He has been working very well for his seasonal debut and actually will make his regular dirt debut in this spot. Can't Stop the Kid comes off a victory versus optional claimers last out and shows an excellent bullet work since that effort. Coming from unheralded connections will probably make him an overlay versus these but he does have the look of a horse who could upset this race.

In the Gotham we will have a rematch of the top two finishers from the Grade 3 Withers stakes, Samraat and Uncle Sigh. These two horses had a virtual match race from start to finish in the Withers with Samraat winning by a length as the second choice. Samraat, who is coupled with Noble Cornerstone in the Gotham, has been installed as the 5 to 2 favorite with Uncle Sigh the 3 to 1 second choice.

While both horses look good in the Withers, one has to wonder how much did that race take out of them. I would try to beat them with a horse coming from off the pace. Now if there is a speed favoring track like we saw at Gulfstream Park last week then one run closers will have no chance in this race. If this is a fair track then I could see a horse coming from far back to win this race like Vyjack did last year.

Harpoon finished full of run in the Grade 3 Sam F. Davis at Tampa Bay to finish second by a nose at this distance in his first start since breaking his maiden. He shipped up to New York for Todd Pletcher and has been working very well for this spot. He was made 10 to 1 on the morning line but I will be shocked if he finishes anywhere close to that post time. Despite finishing sixth in the Grade 2 Holy Bull, Financial Mogul looks very live here. After that race trainer Rick Violette sent the horse to Fair Hill when he has been working very well over the Polytrack for this spot. Shaun Bridgmohan ships in from the Fair Grounds for the mount. Noble Cornerstone showed nothing as the favorite in the Sam F. Davis but he may have had an excuse in the race as he was racing without blinkers for the first time. He gets back the blinkers today and this New York bred might be this good. He will be no value though since he is coupled in the wagering with Samraat.

This winter the best older filly and mare to run on the inner track has been Teen Pauline. The Stonestreet Stables owned filly has finally shown her potential as she has been an impressive gate to wire winner in her last two starts. She will be tested for class in the top flight. While she has defeated three of her five rivals in the race, the two horses she has not faced will be her main competition.

Flores Island makes her stakes debut for Bill Mott. She has won three consecutive races and has shown the ability to run on or off the pace successfully. She will be ridden by Manuel Franco and will probably put a lot of early pressure on Teen Pauline. Summer Applause is making her first start since finishing fourth in the Grade 1 Breeders' Cup Filly and Mare Sprint. She was an impressive winner as the favorite in this race last year and she has been working well for this spot at Palm Meadows for Chad Brown. She is the only horse in the race with multiple graded stakes victories on her resume.  The race looks like a perfect setup for her. With her class and ability she will get to the winners' circle here.

The Tom Fool has the look to be a race that will be dictated and won by a horse that raced for a claiming tag at some point in their career. Strapping Groom drew the rail has been made even money favorite for this race. The David Jacobson trainee comes off an impressive victory in the Gravesend Handicap. He had to scratch from the Grade 3 Toboggan Handicap due to a quarter crack but he is recovered now. His main competition figures to come from stable mate Candyman E, who won the Toboggan and Dads Cap, who finished second to Candyman E in his last two starts. A long shot to look out for this Saturday's Charm. The Steve Asmussen trainee finish second as the favorite on December 26. If there is a suicidal speed duel then Saturday's Charm has the ability to come off the pace and upset the field.