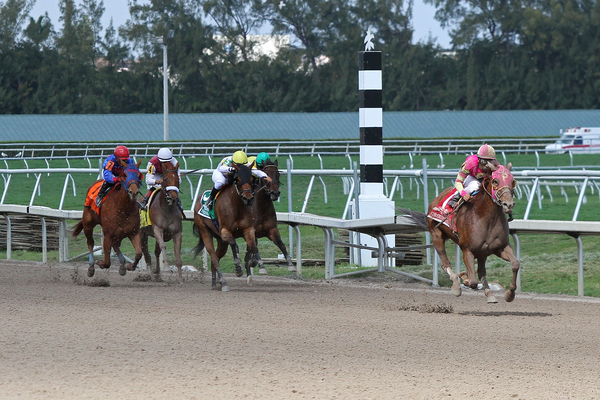 
It was the weekend of transition in horse racing.  Beginning with the television coverage of Fox Sports one, then having the retirement of a future Hall of Famer as well as the emergence of potential champions made it a weekend not to forget.

The eyes of horse racing were looking at Gulfstream Park on Sunday.  It was the debut of the Jockey Club Racing Tour on Fox Sports 1.  The feature race of the broadcast was the Grade 1, $500,000, Donn Handicap featuring Three Year old Eclipse Award Champion and Horse of the Year finalist Will Take Charge making his seasonal debut.  Will Take Charge went off the 3-2 favorite and while he ran a good race to be second, he was no match to Lea, who under Joel Rosario broke the track record while winning his second start under the guidance of Hall of Fame trainer Bill Mott. Lea, who had mostly run on turf prior to moving into Mott’s barn, stalked pacesetting Uncaptured and then once he took over the lead he never looked back to run the mile and an eighth in 1:46.86.  Some will say that the track record was caused by the main track being sealed prior to the running of the Donn, but no one can deny this was an impressive performance by Lea.  Now this has a similar sound for Mott, who took Cigar to win the Grade 1 NYRA Mile after an impressive allowance victory in his first start for him when returning to dirt.  While we are not saying that Lea will turn into another Cigar, Lea is certainly a fine replacement in the barn for the recently retired Flat Out, who also improved when he moved into the Mott Barn.  We look forward to see both Lea and Will Take Charge in the feature as they both have the look to be the top older horse in the country this year.

Also on the broadcast was the Grade 1, $300,000, Gulfstream Park Turf Handicap.  While favored Summer Front showed nothing here, the longest shot in the race, 39-1 Lochte, making his first start in a stakes race, surprised everyone as he got through the rail in the stretch and drew off to win by 2 ¾ lengths.  It was the first Grade 1 victory for trainer Marcus Vitali and jockey Orlando Bocachica.  Imagining, who was expected to be close to the pace, was last early but closed well to be second.

It was also a sad day at Gulfstream Park as Groupie Doll made her final start of her career in the Grade 3, $200,000, Hurricane Bertie.  There was a gasp in the air when she broke last. But jockey Rajiv Maragh did not panic.  Knowing he was riding a champion, he allowed Groupie Doll to gradually move towards the field and on the far turn commenced the five wide move to lead.  At the top of the stretch her class kicked in and she drew off to a seven length victory.  Kudos to owner Mandy Pope for giving Groupie Doll a chance to retire on a winning note and giving her fans one last chance to enjoy her greatness.

On Saturday there were three stakes races run at Santa Anita.  The feature was the Grade 2, $300,500 San Antonio featuring the return of multiple graded stakes winner Game On Dude.  Now seven years old the Bob Baffert trainee was using this as a prep for the Big Cap on March 8.  But the Dude never had a chance to relax as he was pressured on the front end by Blueskiesnrainbows and the two horses battled each other in to defeat, setting it up for the upset victory by 15-1 Blingo.  While we expect Game on Dude to return in the Big Cap to try and become the first horse to win that race three times, it might be time to come to the realization that we may have seen the best already from one of the most popular and talented horses to ever run in Southern California.  Since he has lost three consecutive starts, he should not be given an imposing weight for the Big Cap, especially if Mucho Macho Man and Will Take Charge are in the race.

Three year olds were in action in the Grade 2, $200,500, Robert B. Lewis and a strong contender for the Santa Anita Derby emerged in Candy Boy.  The John Sadler trainee came off the pace impressively under Hall of Fame jockey Gary Stevens to catch Chitu to win by ½ length with favored Midnight Hawk another 1 ¼ length back in third.  Candy Boy has the look of a horse that will enjoy longer distances and might be able to give Stevens his first victory in the Kentucky Derby since 1997 aboard Silver Charm.

Sadler also won the Grade 2, $201,500, San Marcos Stakes with Vagabond Shoes.  Coming fast on the outside Vagabond Shoes, under Victor Espinoza, was able to outkick Si Sage to win by 1 ¼ lengths.