At Santa Anita it was California Cup Day as well as the final start of the career of Teddy's Promise in the Grade 2, $200,250, Santa Monica Stakes.  A victory in the Santa Monica would have made Teddy's Promise racing's next millionaire.  But Scherzinger, who broke on top and then dropped back on the far turn, came on again on the rail in the stretch and overtake Teddy's Promise and win by a length. Iotapa closed on the outside to be second, half a length ahead of Teddy's Promise.  Hall of fame jockey Mike Smith rode the winner for Hall of Fame trainer Jerry Hollendorfer.

The first running of California Cup Derby attracted Grade 1 winner Tamarando, who was returning to race on regular dirt, a surface that he has never won on.  While he finished well in the stretch drive on the outside, he was no match for California Chrome.  The Art Sherman trainee took the lead at the top of the stretch and drew away to win by 5½ lengths under Victor Espinoza.  Tamarando was second as the favorite with  Life Is a Joy third.  California Chrome may run next in the Grade 2, $300,000, San Felipe at a mile and a sixteenth on March 8 at Santa Anita. 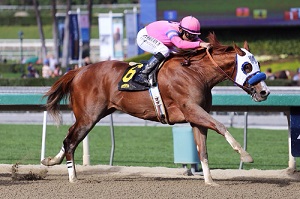 Scherzinger with Mike Smith aboard

After saving ground for most of the race, Susans Express split horses in mid-stretch to take the lead and go on to win the first running of the California Cup Oaks by 1 ¼ lengths.  She was 65-1, the second longest shot in race.  Ridden by Hall of Fame jockey Kent Desormeaux, the Jorge Periban trainee ran the mile on the turf listed as firm in 1:34.72.

In the Grade 2, $200,000, Forward Gal Stakes, Onlyforyou took charge at the start and never looked back, defeating Aurelia's Belle by 2 ¾ lengths.  The Todd Pletcher trainee was ridden to victory by Javier Castellano.

Teen Pauline took advantage of a race lacking quality early speed, setting relaxed fractions and drawing off to win the $98,000, the Ladies Handicap by 10 ¾ lengths over Flash Forward.  The Todd Pletcher trainee and Stonestreet owned filly ran the mile and an eighth on the dirt listed as fast in 1:49.78.

At Laurel, Winning Image took the lead soon after the start and was never seriously threatened thereafter as she won the $100,000, What a Summer Stakes. The Michael Aro trainee was ridden to victory by 61 year old Tony Black, who did his famed flying discount into a split after having his picture taken in the winners circle. There was a claim of foul against the winner for interference in the stretch but no action was taken.