It is full speed ahead for the Kentucky Derby as three-year-olds cranking up to earn points to enter most prestigious race in America. The feature race for three-year-olds this weekend was the Grade 3, $300,000, Southwest Stakes at Oaklawn Park featuring the return of Strong Mandate, who was making his first start since a wide trip third in the Grade 1 Breeders' Cup Juvenile at Santa Anita.

Going off the favorite Strong Mandate was wide into the clubhouse turn and then on the backstretch. He was wide on the far turn but was making a move towards the lead. Tapiture, winner of the Grade 2 Kentucky Jockey Club Stakes at Churchill Downs in November last out, had taken the lead and was moving powerfully on the front end. Strong Mandate started to tire and weaved in and out in the stretch while Tapiture , despite drifting in the stretch, drew away to 4 1/4 length victory. Tapiture earned 10 points with the victory and is now the leader in the Kentucky Derby point standings with 22 points. Strong Mandate earn 4 points for finishing second and now has 6 points overall. Both horses are expected to return in the Grade 2, $600,000, Rebel Stakes on March 15.

The other three-year-old stakes that earned Derby points this weekend was the Grade 3, $200,000, El Camino Real Derby at Golden Gate. Coming from last Tamarando made it powerful move under Hall of Fame jockey Russell Baze to catch Dance With Fate to win by 1/2 length. The Jerry Hollendorfer trainee earned 10 points with the victory and now has 12 points in the standings.

Another three-year-old to watch is Kobe's Back. The John Sadler trainee was last early but then made a strong wide move on the far turn to reach contention and then drew away to win the Grade 2, $200,250, San Vinente Stakes by an authoritative 5 1/4 lengths under Joel Rosario. Owned by the same connections of Candy Boy, Kobe's Back will probably ship out of town for his next start. The Rebel Stakes is a possibility for his next start which would put Rosario in a tough situation because he is also the regular rider of Strong Mandate, who is also expected to run in the race. 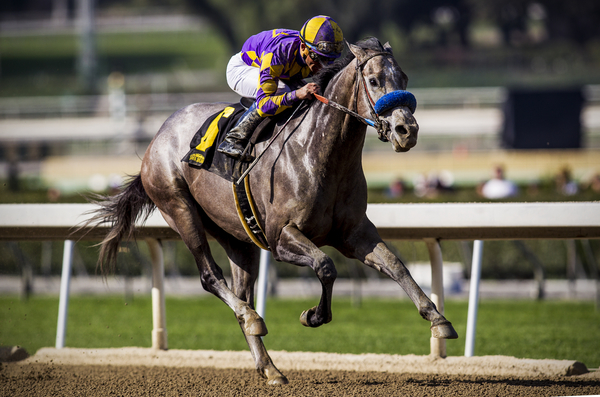 On Monday racing returned to Laurel Park after a few days off to deal with the aftermath of snowstorms on the East Coast. The feature race was the Grade 3, $250,000, General George Handicap going seven furlongs. New York bred Bandbox, who was making his second start off a 17 month layoff due to a chipped sesamoid bone and suspensory issues, made a seven wide move on the far turn under jockey Xavier Perez and drew away to win by four lengths over Tenango. This was an excellent training job by Rodney Jenkins to get the six-year-old by Tapit back to the races and the winners circle. This was the first victory for Bandbox since the 2011 Private Terms Stakes at Laurel.