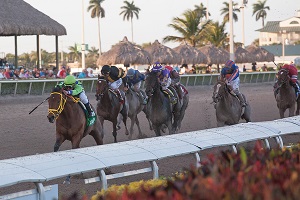 At Aqueduct, it was a battle of New York breds as Uncle Sigh, who was favored by $976, battled in a virtual match race with second choice Samraat in the Grade 3, $250,000 Withers Stakes.  Uncle Sigh set the pace with Samraat pressing the pace from the outside.  In the stretch drive, Samraat edged away from the favorite to win by a length.  It was 10 ¼ lengths back to third place finisher Scotland.

It was the first victory in open company for Samraat, who is now undefeated in four starts. Samraat, who was ridden to victory by Jose Ortiz, earned 10 points in the Kentucky Derby Championship Series.  According to trainer Rick Violette, Samraat will return to Palm Meadows and will most likely skip the Grade 3 Gotham and have only one prep before he hopefully runs in the Grade 1 Kentucky Derby presented by Yum.

At Tampa Bay, Todd Pletcher trained horses ran one two in the grade 3, $200,000 Sam F. Davis Stakes as Vinceramos, ridden by Edgar Prado, held off stable mate Harpoon for the victory. Vinceramos, who scratched from the Grade 3 Hutcheson at Gulfstream to run in this spot, did not earn any points as Churchill Downs removed the Sam F. Davis from the Kentucky Derby Championship Series this year. Vinceramos will most likely return in the Grade 3 Tampa Bay Derby on March 8th.  The winner of that race would earn 50 points in the Derby Championship Series and would also be eligible to win a bonus of one million dollar bonus if the horse then wins the Kentucky Derby.

At Gulfstream Park, favored Wildcat Red took the lead at the top of the stretch and drew off to win the Grade 3, $215,000, Hutcheson Stakes by 4¾ lengths. Ridden by 2013 Eclipse Award winning jockey Javier Castellano, the Jose Garoffalo trainee ran the seven furlongs in 1:22.21 over the dirt course listed as fast. 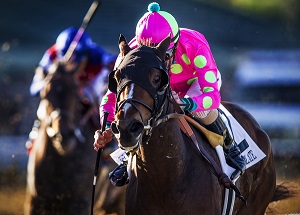 Three year old fillies being pointed to the Kentucky Oaks were also in action on Saturday.  At Santa Anita, Fashion Plate, under another great pacesetting ride by Hall of Fame jockey Gary Stevens, held off favored Streaming to win the Grade 1, $300,500, Las Virgenes Stakes by ½ length.  Fashion Plate earned 50 points towards the Kentucky Oaks Championship Series.  She is now the leader in the series and is virtually assured of a spot in the starting gate of the Kentucky Oaks.  Streaming earned 20 points and is now second on the leaderboard in the series.

Even though Hall of Fame trainer Jerry Hollendorfer had three of the five entrants in the Grade 2, $200,000, Palos Verdes Stakes, the race was expected to be a battle between two finalists for the 2013 Eclipse Award for sprinters, the Bob Baffert trained Secret Circle and the Hollendorfer trained Sahara Bay.  But another horse for Hollendorfer, Wild Dude, had other plans.  Wild Dude made a furious run on the rail and then angled outside in deep stretch and caught Secret Circle to win the Palos Verdes by a neck. Ridden by Rafael Bejarano, Wild Dude was able to win his stakes debut, running the six furlongs in 1:08.09.