What SpeedyPebbles Meant To The Sport

We knew it was coming.  But for her fans....it didn't make it any easier to hear.

Last Friday, Kennel owner Jerry Koppe announced that their megastar JS SpeedyPebbles was retiring from racing after an illustrious career at the Palm Beach Kennel Club.  At almost 4 and a half years old, it was time for sure.  She along with her sister & best friend JS Froot Loops now head back to the farm to be with their owner Shannon Henry in Abilene, Kansas to begin the next chapter of their lives, which will certainly include being mommas to future racing phenoms.

I have had the privilege of covering Pebbles her entire career starting in September of 2013. I've seen all of her races.  I've even watched all her practice schooling runs.  To say I'm a fan of hers would not do it justice.  Obsession is probably a better word for it.

The Name, The Game & The Look

What is it that made SpeedyPebbles such a worldwide sensation?  Everything.  When Henry named this greyhound, it was by a stroke of good luck as she put it.  She knew that Pebbles would be a solid racer but to have the career she had was just unbelievable. The name instantly caught your attention because of its creativity. If you are going to name a racer with this kind of name, she better be good and Pebbles lived up to every expectation and some.

The JS in her name is also extra special.  Henry lost her husband John in 2009 and since then has named the majority of her racers with the initials of their first names.

Pebbles game was simply unmatched the last three years.  58 career victories, a 2013 Dick Andrews Futurity Stakes Title, a 2015 BetAmerica National Championship Finalist, over 50 Grade A victories and many other Stakes Finals to list.  Lets also not forget about her winning the first 8 races to start her career, a Palm Beach record.

If the name or game didn't grab you, Pebbles beauty did.  I'm one of those people that thinks all greyhounds are cool looking, but Pebbles was different.  People were drawn to her like no other.  Any picture I posted on social media immediately was liked, shared and commented by people throughout the world. From Reno, Nevada to Southern California to as far away as South America & Europe, planet Earth knew exactly when Pebbles was starting and couldn't get enough of the information we put out about her. New fans were instantly drawn to a sport that was somewhat hidden for a long time and now had a star to root for.

You simply cannot say enough about what Pebbles did for her Team and for Palm Beach.  Her crew at Koppe, Staats & Collins became one of the most popular Kennels in the country because of her and made Shannon Henry one of the biggest superstar owners this sport has ever seen. Palm Beach also cashed in with Pebbles with interest in the track skyrocketing and Handles continually going up because of the star power Pebbles and All-Americans Rob Gronkowski and Storm Control brought to the track.

To climb the Grade Ladder and go undefeated from Maiden to A to start a career is extremely difficult.  It has only been done a handful of times since Palm Beach opened in 1932. SpeedyPebbles wouldn't be satisfied with just that.

She won her first 8 races to start her career in convincing style, using that patented burst from the box to simply put the competition away early. With social media just starting to become huge, her races, replays and pictures during the streak became a must view.

In the 9th start after the record was set, Pebbles broke from the box as usual but was stepped on by another racer named Atascocita Hilda. Pebbles immediately sat right down on the track, which Koppe said he had never seen a greyhound do before. She was carried off and the worst was anticipated, with the initial thought being she had broken her leg.  Thankfully, it turned out to be just a minor scratch.

To the fans who watched live, they were in utter disbelief.  I talked to track secretary Matt Jameson last summer who described that day Pebbles went down to me.  The phone rang off the hook for hours with fans inquiring about her and needing information.  Jameson said he never had seen that much attention for one greyhound in the 20 years he had worked there.  PebblesMania was official.

Pebbles came back just three weeks later and won her next three starts, making it 11 wins in 12 career starts, yet again a Palm Beach record.

"The Queen of Palm Beach" and #PebblesNation

In 2014, track announcer Mike Jameson declared in one of his race calls on Pebbles that she was "The Queen of Palm Beach" signaling that she was the top female in all of South Florida. The name stuck throughout her entire career and was so fitting.  No other greyhound male or female was as dominant for such a long time at this track. Anybody in greyhound racing knew Pebbles by the nickname and received national attention for it. 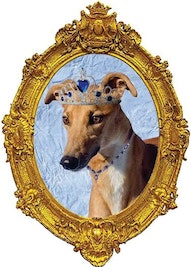 From all the fans and coverage that we were posting about Pebbles, I started putting the hashtag #PebblesNation on everything I posted.  I didn't expect the response that I got.  People from around the world starting putting the hashtag on everything about her, unifying a fan base that could let each others know how we felt about our favorite racer.  Even Mike Jameson screamed out in one of his races calls for "PebblesNation To Stand Up!" as she crossed the line for yet another victory.

I got to meet The Queen last June at the track and in her Kennel.  I watched her win from the 2 hole that day going box to wire to get her back to A Grade where she belonged.  After I was able to meet and congratulate Pebbles and her Team in the cool down area.  This greyhound who was the most popular racer around was all class.  Cool, calm and loving of all the attention that she got. Almost like she knew she was a Queen and I was there to take in her royalty.  One of the best moments in this job I have ever had without question.

I don't think there will ever be a racer quite like JS SpeedyPebbles.  Oh there will be fast greyhounds, catchy names and beautiful dogs that we will see.  But nothing like her.  Rooting for Pebbles wasn't just something to do. You really felt like you were a part of something special being a fan of hers and knowing that others felt the same way you did.  You couldn't wait for the race programs to come out, hoping her name would be on it.  If she drew her favorite 1 hole, you anticipated throwing down a major bet on her knowing that she was going to fatten your pockets that day.

When she won, the first thing you had to post online was PEBBLES!!!!! so that the world knew you were doing cartwheels in your kitchen from excitement. Going to the track with Pebbles slated on the card gave the whole track a different vibe to it. She is also by far the most photographed racer in the history of the sport and it's not even close. 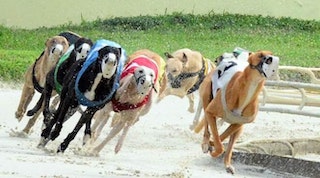 Pebbles now moves on to the next chapter of her life, which she has earned to the highest degree.  No doubt fans will flock to Abilene to see and visit her and anticipate the day she has pups that will carry her famous pedigree. She will be spoiled beyond belief, treated like the royalty she made for herself and adored by the fans who love her. The living legend meant so much to the sport and leaves the game in a much better place then when she first started.

So long Queen...you will certainly not be forgotten anytime soon. Thank you for all the amazing memories. I thoroughly enjoyed being one of your loyal subjects.

Palm Beach will have a special retirement ceremony for JS SpeedyPebbles on Memorial Day Monday, May 30th to honor her at the track. A fabulous touch by a track that knows they had a true talent running for them all these years.

I asked people in the industry about Pebbles and what their favorite memories were from her career:

"Pebbles, Loopy, Mac & JayHawk gave us a great group of pups to work with back in 2013.  They kind of put us on the map for greyhound racing.  My favorite memory from Pebbles was her winning her first 8 races.  When Pebbles was away in Daytona for the National Championship, Loopy (sister JS Froot Loops) was one of the saddest dogs I had ever seen. She wouldn't eat and I couldn't even run her that week. It was the first time they had been apart in their whole life. They were one special group." 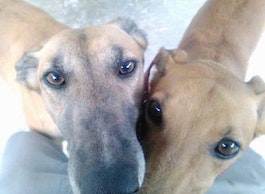 "What I remember about JS SpeedyPebbles the most is the great effort, she constantly defied the odds. She left it out on the track.  The other thing I remember is her going from Maiden to A undefeated.  I can count on my two hands the number of greyhounds I've seen do that, it's very rare. I also remember her winning the Dick Andrews Futurity the day after Christmas in 2013.  I was rooting for her and she truly proved the doggie doubters wrong."

"Pebbles was in my opinion the first true social media darling in this country. There might have been better dogs running elsewhere but nobody had the fan following of The Queen.  She won't be soon forgotten at the PBKC!"

"My biggest memory was when she broke the record for most wins ever to start off her career.  Also another was the trip to Daytona for her to run in the National Championship.  I have never seen a dog get the support she has.  All the people who watched her videos after you posted was amazing. Nobody will miss her more then trainer Smiley (Ismael Musquiz). He picked her up after every race she ran and slept every afternoon with her in her crate. She lays her head right on his belly.  Definitely going to miss her. We all love her. #PebblesNation rocks." 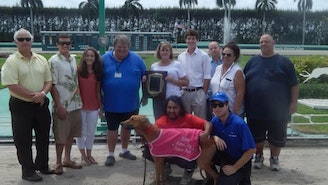 Mike Balsamo - Host of The Backstretch Show on 95.9 FM The Palm

"In the 5+ years we have been doing The Backstretch Show, we've seen The Kennel Club produce some amazing, talented dogs.  None of them captured people's hearts quite like The Queen."