Wiggle It Jiggleit Wows Them in Quillen

Storms that raced through the Mid-Atlantic region may have left the Harrington Raceway surface sloppy on Monday night, but they could have hardly dampened the enthusiasm at the Delaware half-mile oval.

In his return to the track, Harrington-based Wiggle It Jiggleit (Montrell Teague) used his inside post and early speed to gain command in a 26-second opener and was never seriously threatened thereafter en route to a three-length score in 1:50 flat to capture the $150,000 Bobby Quillen Memorial.

A four-year-old gelded son of Mr Wiggles, Wiggle It Jiggleit notched his 13th win from 21 starts this year and pushed his seasonal earnings past $1.4 million by taking the Quillen. 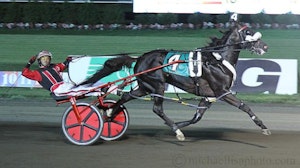 Wiggle It Jiggleit will next head to the Dayton Derby at Dayton Raceway in Ohio on October 1. He rebounded from a narrow setback against Always B Miki in the Jim Ewart Memorial at Scioto Downs with his Quillen score and remains the top horse of any age or either gait in the land.

Right now his ability might only be equaled by his popularity. The Harrington Raceway dining room had been sold out for two weeks leading up to the Quillen and the winner's circle celebration was an overflow crowd of fans and dignitaries and Quillen family members.

Defending Quillen champion Mach It So (Tim Tetrick) rallied second over to finish second while three lengths back, but nearly a length better than Luck Be Withyou (Eric Goodell). Both might also be headed to Dayton one week from this Saturday.
Racing
Loading...