Will the Bob Baffert Trained Justify Turn Into a Derby Contender?

The Bob Baffert trained Justify broke his maiden at first asking. Since looking incredibly impressive when breaking his maiden, more than one horseplayer has declared that Baffert has another Derby, heck, maybe even a Triple Crown winner in his barn.

Was Justify so impressive that he deserves mentioning as the horse to beat in this year's Kentucky Derby? Maybe. Maybe, not. Let's take a look at the pros and cons of sending Justify up your Derby Rankings.

Why Justify Will Win the Kentucky Derby

Justify is Bred to be Awesome - Scat Daddy, one of the best sires in the past 10 years, sired Justify. Scat Daddy sired Lady Aurelia and Carvaggio.
They both won races at the Royal Ascot Meet in 2016. Justify's broodmare is Stage Magic. Her sire is Ghostzapper. Ghostzapper was sired by Awesome Again. Both Ghostzapper and Awesome Again won the Breeders' Cup Classic.

Justify is fast...really fast - Justify broke his maiden by 9.5 lengths after running a half-mile in :44.37. That's fast. He's already the fastest horse on the Triple Crown Trail. He could be so fast that the negatives, which I'm about to get into, might not matter.

Many years have passed since 1882. That's when Apollo became the last horse not to run as a two-year-old to win the Kentucky Derby. Seasoning means a lot. Horses that don't have the seasoning often don't run well in the Derby.

The toughest of American Pharoah's Triple Crown wins was the Kentucky Derby. 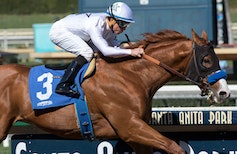 He cruised in both the Preakness and the Belmont Stakes. Once Pharoah got more experience in the Derby, the other two races were easy for him. Curlin finished third in the Derby. It was only his third lifetime race.

The Derby might be Justify's third or fourth ever race. Could he actually win the Derby after only 2 or 3 lifetime races?

Justify runs like a sprinter - Check out a video of Justify's maiden score. Yes, he was incredibly impressive. But, his action implies that he probably isn't ready to run 1 1/4 miles. It has nothing to do with breeding. He runs like a compact sprinter. He appears to hit the ground hard. He doesn't look like a relaxed runner. He'll to relax on or near the lead, like American Pharoah, and Arrogate in the Travers, to win the Kentucky Derby.

I'm not ready to climb onto the Justify bandwagon. We'll see what happens, but my initial thoughts are that Bob Baffert has another late-blooming, awesome, three-year-old on his hands.