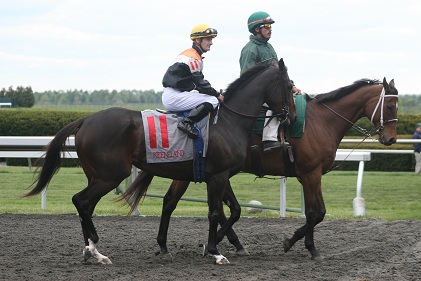 Saturday's card at Arlington Park is the highlight of the yearly meet, Arlington Million day. Headlining the day is the Grade 1, $1-million Arlington Million, which drew a field of 13 including last year's winner, Little Mike.

After Little Mike won the Arlington Million last year he did not fire in the Turf Classic at Belmont then won the Grade 1 Breeders' Cup Turf over one of the top North American turf horses Point of Entry, but something has been amiss this year. The connections shipped the six-year-old gelding to Dubai where Little Mike finished eighth and eleventh against some of the best turf courses in the world.

Off from late March to early July, Little Mike came back to finish fourth in the Grade 1 United Nations at Monmouth Park. Second start off the layoff with good works on the tab expect improvement from the front-runner.

Little Mike should be where he always is, out on the lead, but he may not find it as easy early as it was last year when jockey Ramon Dominquez slowed the pace to a walk. This year he will have to deal with Nates Mineshaft, the speed dirt horse who just won an allowance race over the Arlington Park turf course, and Rahystrada, who was in the Million last year and is coming off a wire-to-wire win in the Grade 3 Arlington Handicap.

Before we get to the Euros, and there are five, let's look at perhaps the best chance for the U.S.-based horses, Indy Point, the Argentine-bred Richard Mandella-trainee.

Indy Point was a three-time Group 1 winner in his native Argentina before shipping to the States last December. Mandella entered Indy Point in the restricted Wickerr Stakes and simply outclassed his rivals, winning by just over a length. Jockey Gary Stevens is no stranger to the Arlington Million, winning the prestigious race in 1990 aboard Golden Pheasant and in 1997 on the back of Marlin. Stevens also crossed the line first in 2003 with Storming Home, but was disqualified after ducking out and dropping Stevens. It's one ride Stevens would love to forget.

The European charge is led by the Michael de Kock trained The Apace, the South African-bred that has won seven of his 19 career races for earnings of almost $1.5-million. The Apace had a good prep race for this last month at York, finishing fourth in the Group 2 York Stakes. Second in that race was Grandeur, who is no stranger to these shores.

Grandeur is 7-2 on the morning line and may be the post time favorite as well. Last year the four-year-old gelding won the Grade 2 Twilight Derby at Santa Anita and the Grade 2 Hollywood Turf Cup at Hollywood Park. The Irish-bred started in career in England and is the horse to beat.

Little Mike and Indy Point certainly have their work cut out for them on Saturday. Post time for the Arlington Million is 6:44 pm ET.

One race prior to the Saturday feature at Arlington Park is the Grade 1 Beverly D. for the fillies and mares and this is one good race. The $750,000 race pits two top European fillies and against one of, if not the, best turf fillies or mares in the U.S. We start with that filly, Marketing Mix.

Marketing Mix, shown above, a five-year-old mare by Medaglia d'Oro, has won 10 of her 18 career races with another four seconds and one third. Her $1.8-million in earnings has been won over seven different courses, two different countries (Canada and the U.S.) and from distances ranging from six and one half furlongs all the way to twelve furlongs.

Trainer Tom Proctor has had her holding form in the mornings and the Glen Hill Farm-owned mare can make up for the head defeat she suffered in this race last year. The winner of that race was I'm A Dreamer, a European from the David Simcock yard.

Simcock didn't bring any of his fillies this year, but the European duo of Duntle and Dank are still very strong.

Last year I'm A Dreamer used a prep at the Curragh en route to winning the Beverly D., which is exactly the path Dank is taking this year. Dank has won have of her 10 career races highlighted by the Group 2 Esttate Stakes last month. According to the charts, the British-bred filly tracked early and won in hand. It was an impressive effort and trainer Sir Michael Stoute would not ship over unless she was ready to roll again.

Two starts back, Dank finished third in the Group 2 Duke of Cambridge Stakes at Ascot, a half-length behind Duntle, who just had her five race win streak snapped by Elusive Kate in the Group 1 Prix Rothschild at Deauville in France. Duntle will be making her first start past a mile while Dank gets stronger as the race gets longer. Two of the three group wins for Dank were at nine furlongs.

The "other" Euro in the group is Gifted Girl, whose best finish was a second place in the Group 3 Princess Elizabeth Stakes in May at Epsom. Her and Dank are the only two of the three that will receive lasix.

La Tia is 20-1 on the line, but expected to set the pace. She just finished third behind Ausus and Artemus Kitten, who are also long shots in the Beverly D. Starformer should also be up close and is a Grade 2 winner in her own right. This is obviously tougher.

Solid Appeal is the final filly in the race coming off of back-to-back Grade 2 wins, and three straight overall, north of the border at Woodbine. Solid Appeal gets the acid test on Saturday, but is in the best form of her life. Time to strike while the iron is hot. She's going to need to race of her life to defeat the three favorites.

The first of the three Grade 1 races on Saturday at Arlington Park is the $500,000 Secretariat Stakes for three-year-olds going ten furlongs on the turf. A field of 13 will line up for the race; let's take a look.

The morning line favorite at 3-1 is the Todd Pletcher-trained Jack Milton. By War Front, Jack Milton has won twice in his five career starts and has yet to finish worse than third. He is coming out of a second place finish in the Grade 2 Virginia Derby, which may explain why he is favored over Rydilluc.

Rydilluc defeated Jack Milton in the inaugural Penn Mile at Penn National in June, but finished eighth, beaten over 11 lengths, in the Virginia Derby. It was an uncharacteristically poor race for the son of Medaglia d'Oro so expect a return to the form that made him a Grade 3 winner earlier in the year.

Also coming out of the Virginia Derby is Draw Two, who finished fourth, three and one-quarter lengths behind Jack Milton. Draw Two drew post 12 for the Secretariat and will be ridden for the first time by Hall-of-Famer Gary Stevens. Draw Two may be overlooked in the wagering and could be worth a bet at long odds.

The local prep for this Grade 1 battle was the Grade 3 American Derby and only two horses come out of there to run on Saturday. The best one being Admiral Kitten, who finished a nose in front of Stormy Len, the other horse entered for the Secretariat.

Admiral Kitten was favored in the American Derby and his charge just fell a head short. It was the fourth time the Kitten's Joy colt has finished second so he may have bit of a hang in him. Stormy Len was coming off an allowance win at Belmont Park into the American Derby and responded well. The allowance win was over ten furlongs and he is the only entrant in the field with a win over the distance.

We can't escape an Arlington Million day race without a European presence and the Secretariat is no different. Three come over the pond for the shot at the money; Visiyani, First Cornerstone and Yeager.

Yeager also gets first-time lasix, Visiyani does not, looking for this third straight win after taking a maiden race at Leicester and a handicap stakes at Ascot last month. Yeager isn't exactly stepping foot onto U.S. soil as the son of Medaglia d'Oro is a New York-bred.

The French-bred Visiyani has been no worse that fourth in his six career starts including two wins. He is another with Group placings at two, but has not carried that form over to his three-year-old season. The other two Euros rank slightly ahead of Visiyani.

On paper it looks like the race will have a decent pace, which will set it up for First Cornerstone, Admiral Kitten, Jack Milton, Draw Two and Tattenham. Tattenham is a Juddmonte Farm-owned colt by Rock Hard Ten making his graded stakes debut. He may be one to watch in the future as is Balthazar, the deep closing son of Red Giant. His maiden breaker at Keeneland was one of the most impressive races of the spring meet.

The stakes race that kicks off the $200,000 guaranteed pick-4 pool is the second running of the $400,000 American St. Leger Stakes. The marathon turf race was won by a Euro last year and the overseas shipper again look dominant.

At 9-5 on the morning line, Dandino checks in as the favorite. The British-bred six-year-old has won seven of his 24 career races with eight seconds and one third. Dandino has won over $700,000 in his career and is Grade 1 placed, finishing second last year in the Grade 1 Canadian International at Woodbine.

Dandino regularly races at 12 furlongs and above so this 13 and one-half furlong race will not be a problem. His biggest problem may be defeating Wigmore Hall, the Irish-bred Grade 1 winner.

Wigmore Hall also set foot on Woodbine's turf course last year, winning the Grade 1 Northern Dancer. He was also fourth in the Canadian International, just under two lengths behind Dandino. The one thing Wigmore Hall has in his corner is familiarity with Arlington Park. The High Chaparral gelding finished seventh in last year's Arlington Million.

The U.S. hopes are led by Dark Cove, the six-year-old horse that has won three straight races and four of his last five. Dark Cove started his three-race streak in the Grade 2 Elkhorn then won the Grade 2 Louisville Handicap and Grade 3 Stars N Stripes. All three races were over 12 furlongs with the Stars N Stripes coming over the Arlington turf. Jockey Joel Rosario should be out near the lead sitting just off of Ojos de Hielo and Ioya Bigtime.

Ojos de Hielo is a Texas-bred who began his career in Panana and looks a bit out of place in the American St. Leger. Ioya Bigtime; however, is a Grade 3 winner over the track and could be used underneath at a price. It has been awhile before the six-year-old has visited the winner's circle, but he will affect the pace.

Suntracer and Najjaar are going to be running late and will appreciate the longer distance. Whether or not they can outfinish the classy Europeans, that is the question.

First post on Arlington Million day is 1:45 pm ET with the first running of the $65,000 Straight Line Stakes. There are three pick-4's on the day starting in races three, seven and nine as well as a pick-5, race eight, and a 10-cent jackpot pick-9. It is going to be a great day at the Chicago area track.