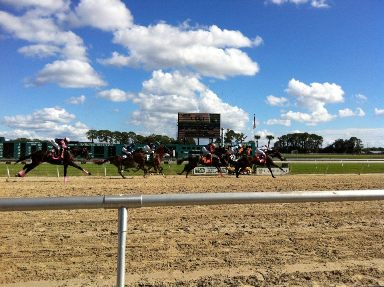 The feature race for the 2012-2013 Tampa Bay Downs meet is this Saturday with the 33rd running of the Grade 2 Tampa Bay Derby. The race has a rich history of gathering some of the top three-year-olds and this year is no different.

Verrazano tops the field and will be tough to beat if he can transfer his Gulfstream Park form to two turns at Tampa. The son of More That Ready won his debut on New Year's day by almost eight lengths then absolutely blitzed allowance runners by 16 lengths in his second career start. Todd Pletcher has his colt primed and ready for the Tampa Bay Derby, but that doesn't always equal a win.

The last time Pletcher won the $350,000 race was back in 2004 with Limehouse, but has been no worse than fourth in the last five years. Three of those placings were by a half-length or less including two neck losses by Atoned in 2008 and Join in the Dance in 2009.

Falling Sky and Dynamic Sky, no relation, finished one-two, separated by a neck, in the local prep race for the Tampa Bay Derby, the Sam F. Davis, and will be well supported to upend the favorite.

Falling Sky was a long shot in the Davis, off at nearly 8-1, but he responded well with a wire-to-wire victory. He looked to be getting a little tired at the end as it was his first start off nearly a two month layoff; however, at no point in the gallop out did it appear Falling Sky was going to let Dynamic Sky by.

Dynamic Sky was favored in the Grade 3 race and how makes his third start off the layoff. Trainer Mark Casse will make a switch in the irons, going from Luis Contreras to Joel Rosario. Rosario is having a great meet at Gulfstream Park and has yet to miss the board in four starts this year at Tampa.

Honorable Dillon has a lot of talent as evident by his race record and will now make his two-turn debut on Saturday. The son of Tapit is bred to stretch out in distance and could just a nice stalking trip just off the speed, which looks to be a little hard to predict.

Honorable Dillon, Purple Egg and Park City are all going sprint to route while Eton Blue and Verrazano are making their first starts around two-turns. Throw in front-runners Offlee Fast and Falling Sky and this year's Tampa Bay Derby could just be one for the ages.

The feature race on Saturday at Gulfstream Park did not draw a very big field, but the quality cannot be disputed. We start with last year's Breeders' Cup Classic winner, Fort Larned.

Fort Larned is no stranger to the Gulfstream Park strip with two wins in three starts. Last year he won the Grade 3 Skip Away, which was really put him on the stage. After that win, Fort Larned won three of his next six starts including the Grade 1 Whitney Invitational at Saratoga and of course, the Breeders' Cup Classic.

Now, it's possible that the five-year-old E Dubai colt will need a race off the layoff, but he appears to have been working well in the morning across town at Palm Meadows.

Prior to his last race, Fort Loudon was sporting a five race losing streak, all five races coming since switching barns to Nick Zito. Then in the Sprint Championship, Fort Loudon responded with a gritty half-length victory over Swagger Jack. The one mile distance of this race may be a furlong too long, but Fort Loudon enters the race in top form and gets six pound from the favorite.

The wise guy horse that could upset the top two is Discreet Dancer, a four-year-old colt by Discreet Cat out of the Gone West-mare West Side Dancer. In 2012, Discreet Dancer was a to three-year-old and started favored in the Grade 2 Fountain of Youth over future Belmont-winner Union Rags. Discreet Dancer finished third in that race then was not seen until he came back to the races last month. Trainer Todd Pletcher had his colt well prepared for the race off the layoff, but will need to step it up on Saturday.

One interesting thing to note when looking at the past performances is that Discreet Dancer started his career off very similarly to Verrazano. Perhaps Verrazano becomes a bet against at short odds in the Tampa Bay Derby.

Swagger Jack is the most likely one of the remaining three to finish behind the favorites. The five-year-old Smart Strike colt has four wins and two seconds in 14 career starts with his best finish coming behind Fort Loudon in the Sprint Championship. One positive for Swagger Jack is that he is three-for-five at one mile on the dirt including two-for-two at Gulfstream Park.

Gourmet Dinner is a millionaire who has seen his better days while Decaf Again has absolutely no business being in this race. Decaf Again would need a miracle to even hit the board.

First post at Gulfstream on Saturday is 1:05 with the Gulfstream Park Handicap scheduled to break from the gate at 5:35.

The second of the two three-year-old Kentucky Derby prep races on Saturday is the Grade 2 San Felipe at Santa Anita. The $300,000 race drew a field of eight led by Flashback and Goldencents.

Flashback drew post two, Goldencents three, so we start with the son of Tapit. Flashback has won his first two starts by almost a combined ten-lengths including a facile six and one-quarter length score in the Grade 2 Robert B. Lewis, the prep race for the San Felipe.

There is no questioning the talent of Flashback, but he is giving up a lot of experience to Goldencents, who has won his last two races and is three-for-four to start his career.

Goldencents broke his maiden like a good thing at Del Mar then went on to be a good second to eventual Breeders' Cup Juvenile winner Shanghai Bobby before ending his two-year-old campaign with a victory in the Jackpot at Delta Downs. Trainer Doug O'Neill then gave him some time off with a return to the races in early January in the Grade 3 Sham.

Things did not go as planned for Goldencents in the Sham, he was second in the early stages instead of on the lead, but no worries for the son of Into Mischief as he drew away late to win comfortably. It should be an interesting gate break as both favorites have natural early speed.

Should the two hook up and the track is playing fair, Tiz a Minister and Omega Star will be doing closing the gap late. The two exit the California Breeders' Championship Stakes, won by Tiz a Minister by a length and one-quarter over Omega Star.

Omega Star may have more upside even though he finished second behind Tiz a Minster. The California-bred son gelded son of Candy Ride started his career in Aqueduct then shipped to Santa Anita and broke his maiden by three lengths in state-bred maiden special weight. While he now faces open company, Omega Star looks to be a very talented sort.

Tiz a Minister benefited from the hot early pace on a day that the track played very well towards late closers. Purchased for $6,500 at the Barrett's October 2011 sale, Tiz a Minster has already made $246,780. Not a bad return on investment.

Hear the Ghost is the final runner that deserves a look, making his first start around two turns. The son of Ghostzapper should love the added ground and will be in a good stalking position under jockey Corey Nakatani. Perhaps he gets first run on the front-runners if they tire. That; however, is a big if.

Post time for the Grade 2 San Felipe on Saturday at the Great Race Place is 6:35 ET.

The stakes action at Oaklawn has picked up steam over the last couple of weekends and on Saturday there are two graded stakes. Three-year-old filly Flashy Gray looks to follow in the hoof prints of Rachel Alexandra from Oaklawn to the Kentucky Oaks as she gets started in the Grade 3 Honeybee, but the main attraction of the day is the Grade 3 Razorback Handicap.

Alternation absolutely loves the Oaklawn track with five wins in six starts in Hot Springs. One of those wins was the Razorback last year and while this year may be tougher, the five-year-old gelding looks to be working very well in the mornings.

Last year Alternation kicked off his campaign with a win in the Essex Handicap then went on to win not only the Razorback, but also the Oaklawn Handicap over the track. This year; however, the son of Distorted Humor has not run since a disappointing sixth place finish as the odds-on favorite in the Grade 2 Hawthorne Gold Cup. Perhaps the favorite needs a race off the long break and there are plenty of contenders to choose from.

Four horses are between 4-1 and 5-1 on the morning line and all of them have a chance to upset.

Cyber Secret and Atigun come out of an allowance race won by Cyber Secret last month with Golden Ron splitting the two in second. Atigun was the favorite in that race and now has every right to improve second off the layoff. Cyber Secret makes his third start off the layoff on Saturday, which is often times the best run from a horse. Also note that Charles Cella, owner of Cyber Secret, owns Oaklawn Park, so you know he would like nothing other than to win this race.

For as talented at Atigun promises to be, the four-year-old colt only has three wins in 15 career starts, none of them in stake races. He is the 4-1 second choice.

Donoharm and San Pablo exit the Essex Handicap last month where Donoharm got the better of his rival by three-quarters of a length. Donoharm was nearly 8-1 with San Pablo the odds-on favorite. San Pablo is a good horse, nine wins in 16 starts, but there is other pace in the Razorback and that may set the race up once again for Donoharm, who is currently riding a five race win streak at three different tracks.

Brethren has been all over the United States, from New York to Kentucky to Florida to Arkansas to Oklahoma to Louisiana and now returns to Arkansas looking for his biggest win since the Sam F. Davis in 2011. The half-brother to Kentucky Derby winner Super Saver, Brethren was 11th in the Arkansas Derby in 2011 when he was trained by Todd Pletcher. Not sure what his class is these days, but in a wide open race, anything can happen.

Long shots Ride the Lightning, Raison d’Etat and Najjaar complete the field with post time scheduled for 6:09 ET. If they go really crazy up front, Najaar can hit the board at a huge number.