The Player’s Edge; The Preakness at Pimlico Race Course 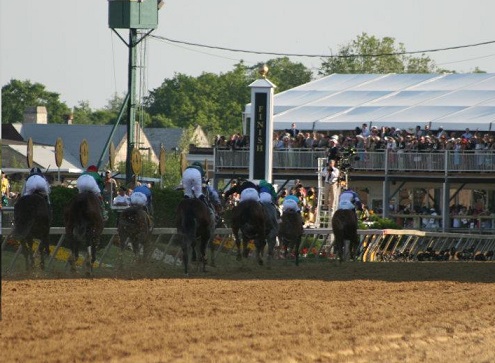 The feature race across the country this weekend is the Grade 1 Preakness Stakes at Pimlico, which drew a field of nine led by the Kentucky Derby winner, Orb.

Orb was the post-time favorite for the Kentucky Derby at very generous odds of 5.4-1, he is now even money for the Preakness, the lowest price he has been since his second career start, which he lost by 22 and one-quarter lengths. Of course a lot has changed since that September day at Belmont Park. Orb is now a two-time Grade 1 winner and two legs away from being the first Triple Crown winner since Affirmed in 1978.

While Orb is an imposing favorite, there are some things that people may grasp onto while handicapping to pick against the favorite. First is the post position, no horse has won from the rail since Tabasco Cat in 1994. Second is the Derby race, with the fast pace, set up perfectly from him and finally, with the best race of his career in the Derby, a bounce is possible.

Now those are some things that can be overcome. Since 1994 how many favorites have drawn the rail? How many of those horses from the rail were a top five betting choice? Time for some research. Also, Orb has won from far back and was also close to a slow early pace in the Florida Derby. Jockey Joel Rosario can put him anywhere during the early stages and if his workout this week is any indication, there will not be a bounce.

Looking past the favorites, there are several who could upset or round out the exacta. We start with the horse directly to the outside of Orb in post two, Goldencents.

Goldencents finished 17th in the Derby after being up close to the very fast pace set by long shot Palice Malice. It was the first poor start for the son of Into Mischief and they had a built-in excuse with the sloppy, sealed track. On a fast track he is eligible to improve. The problem is; however, that once again the pace scenario looks fast.

Not only do you have Goldencents, but you have Oxbow, Governor Charlie, Itsmyluckyday and the stretch-out sprinter Titletown Five.

Oxbow and Itsmyluckyday finished sixth and fifteenth in the Derby and also can improve. Oxbow was up close to the pace and finished a respectable sixth while Itsmyluckyday absolutely hated the track. He was in a perfect position in the early stages, but he was not handling the track at all. Itsmyluckyday should be right there with Goldencents and Orb at the finish.

My Lute may have bit of a hang in him otherwise there are no knocks to the Tom Amoss-trained colt. Prior to the Derby, My Lute was second in the Grade 2 Louisiana Derby, a race won by Revolutionary with an interesting runner finishing third, Departing.

Departing is the new face to the Triple Crown after winning four of his first five starts including the Grade 3 Illinois Derby at Hawthorne. He has a similar style to Orb so there could be some jockeying going on between Brian Hernandez and Joel Rosario. Departing needs to step up his game and prove he is Grade 1 worth and will get that change on Saturday.

Post time for the Preakness is 6:20 pm ET and, no matter who we wager on, we will all be rooting for the chance to see a Triple Crown.

The third leg of the late pick-4 at Pimlico and the race right before the Preakness is the Grade 2 Dixie Stakes for three-year-olds and upward going nine furlongs on the turf course. The race drew a field of 13 and the connections of Orb are looking to start the daily double with a win by Imagining.

While Orb is co-owned by Stuart Janney and the Phipps, Imaging is solely owned by the Phipps. The five-year-old has won three of his last four starts and four of nine in his career. This will be the second time Imagining has tackled graded stakes company after having finished second in the Grade 1 Hollywood Derby in 2011 and fifth in the Grade 2 Nijinsky at Woodbine last July.

Imagining, while talented, is not a slam dunk as the Dixie field came up salty. Of the remaining 12 runners, eight are graded stake winners.

Willcox Inn drew the rail for the race and is looking for his first win since July 2012. The son of Harlan's Holiday won the Grade 3 Hawthorne Derby and Grade 2 American Derby back in 2011. He may be best used underneath.

Doubles Partner is another with a big winless streak, not having tasted victory since the Grade 3 Canadian Turf at Gulfstream Park in March 2012. Since then, in seven starts, Doubles Partner has yet to be worse than fourth.

Howe Great is making his third start off the layoff and we finally have a horse that won his last race. Howe Great won an allowance race at Keeneland a month ago and won his graded stakes race at Gulfstream Park in the Palm Beach as a three-year-old last year.

Swift Warrior has won back-to-back Grade 3 race at Sam Houston and Tampa Bay Downs and has won six career races over five different race tracks. It appears he has been working very well in the mornings and picks up Rosie Napravnik in the irons.

Humble and Hungry has only made four starts since his graded stakes win in the Commonwealth Turf at Churchill Downs in November 2011 with one of them a second place finish in the Dixie last year. He makes a similar second start off-the-layoff and could hit the board at a nice price.

Of the others; Utley, Thunder Lord, See Tobe and Skyring, Utley may be worth including at a price. The five-year-old horse was well thought of as a juvenile and looks to be coming into his own with back-to-back wins.

The Grade 3 Maryland Sprint Handicap is the second leg of the late pick-4 at Pimlico on Saturday, which drew a field of ten sprinters. The morning line favorite for the race is Sage Valley, who has won three straight races.

Sage Valley has not been out since winning a small stakes race at Aqueduct in early November and has only been working since late March. This is his first attempt in a graded stakes race; however, and there are several others who have been knocking heads with some tough company. The outside draw helps the four-year-old colt as he can stalk or make the early pace.

The favorite is not the only horse coming into the race with a long winning streak. Manito has won four straight races against lesser competition, but he has done it well. The seven-year-old gelding won his last race over the course and the second place finisher has already come back to win his next start. Time to strike at this level while the iron is hot.

On the morning line the picks to upset the favorite are Hardened Wildcat, Action Andy, Candyman E and Laurie’s Rocket.

Hardened Wildcat is coming off a neck victory in an allowance race at Aqueduct and has won four of nine overall. The four-year-old gelding was fourth in the Grade 2 Woody Stephens and second in the Grade 3 Bay Shore last year as a three-year-old. He will be doing his best running late.

Action Andy is all speed and from the rail he should break from the gate and go straight to the lead. The Maryland-bred gelding has been first or second in 22 of his 33 career starts, but always seems to find a couple better in graded stakes. He was third in this race last year.

Candyman E won the DeFrancis Memorial back in 2011 then was off for a year from February 2012 to February 2013. In his three starts back, Candyman E has a win, a second and a third with the third place finish coming in the Grade 3 Commonwealth at Keeneland last month. He can adapt to any pace and may be a nice price on the board.

Laurie’s Rocket comes out of a pair of Grade 3 races at Oaklawn and Churchill Downs and is another who always seems to finish in-the-money. Jockey Joel Rosario gets aboard the colt for the first time since running fifth in the Grade 1 King’s Bishop at Saratoga last August. If the pace is fast, Laurie’s Rocket will be storming down the lane late.

Post time for the Maryland Sprint Handicap is 4:42 ET.

Pimlico – Gallorette Handicap Fillies and Mares on the Turf

The first leg of the late pick-4 on Saturday that ends with the Preakness is the Grade 3 Gallorette Handicap for fillies and mares going eight and one-half furlongs on the turf. The field of ten is led by morning line favorite Samitar; let’s take a look.

Old Tune and Pianist check in next and both have ran behind Samitar in the past. Pianist is coming off a layoff after finishing fifth in the Honey Fox, Samitar was second, while Old Tune was seventh in the Jenny Wily. The two have similar running styles in that they both like to run on or near the pace, which may not be ideal in the Gallorette.

Daydreamin Gracie, 20-1, and Silver Screamer, 8-1, are two others that can be up close. Appealing Cat has won two of her last five races and in both of those she right behind the front-runners at the half. Appealing Cat finished behind Old Tune in two races at Tampa Bay Downs in February and March so she must find some more.

Hard Not to Like, Embarr and Charged Cotton are three long shots that may upset the favorites if the race falls apart. Hard Not to Like has actually proven hard to like in her races even though she has shown some decent races in the past. She won the Grade 3 Marshua’s River at Gulfstream Park in January.

Embarr is gets a look not only on the horse-for-course angle, but also because she has come back class. The Virginia-bred daughter of Royal Academy is three-for-three on the Pimlico turf course and was second in the Grade 3 Athenia at Belmont Park in October. Bred, owned and trained by Susan Cooney, Embarr is out to embarrass the field.

Charged Cotton is 12-1 on the morning line and was a length behind Embarr in their most recent start. Four lengths back entering the stretch, Charged Cotton closed strongly, but ran out of room. The extra sixteenth of a mile will help her cause.

First post on Saturday at Pimlico is early, 10:45 am ET with the Gallorette scheduled for 4:00.