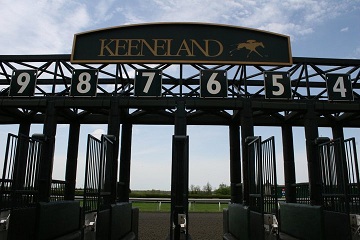 The feature race on Saturday, closing day, at Keeneland is the 56th running of the Grade 2 Fayette Stakes for three-year-olds and upward. The nine furlong race drew a field of nine led by morning line favorite Willcox Inn.

Willcox Inn is making his second start of the meet after finishing third in the Grade 1 Shadwell Turf Mile three weeks ago. That race, originally scheduled for the turf, was moved to the main polytrack after heavy rains. Willcox Inn did not mind the change in surface, but when you are facing Wise Dan and Silver Max, third place is a pretty good finish.

Two starts back the favorite won the Washington Park Handicap at Arlington Park over nine furlongs so the added distance will not be a problem.

The Polytrack has played very kind to closers this meet and in addition to Willcox Inn; Villandry, You Know I Know, Nikki’s Sandcastle and Finnegans Wake will all be doing their best running late. The race could even look like a European turf race, every horse separated by less than five lengths with a mad, three-furlong dash to the wire.

Leading the pack should be Set the Sail, who is coming off a front-running victory in an allowance race over the turf at Churchill Downs. Set the Sail looks to be very adaptable to the pace and that may be his biggest asset on Saturday, but he must avoid a duel with 50-1 long shot, Ol Army.

If the two front-runners go out and knock heads early, Lea and Winning Cause should be right there to get first run.

Lea has not started since late August at Saratoga and is making her Polytrack debut. The son of First Samurai has run on the turf before so he should handle the surface switch. In June, Lea finished second to Wise Dan in the Grade 2 Firecracker at Churchill Downs.

Winning Cause exits the Phoenix Stakes, a perfect sprint prep for this distance. By Giant’s Causeway, Winning Cause is a router top and bottom and the last time he went sprint to route, he won the Grade 3 Lexington over this course.

The closing day feature should be a good one and is likely to produce an exciting stretch run, post time scheduled for 5:21 pm ET.

The start of the late pick-4 on Saturday at Keeneland is a non-winners of two lifetime allowance race for fillies and mares, which drew a full field of 12. The pick-4 represents a great opportunity to make some money heading into the Breeders’ Cup next weekend.

Tapit’s World is the 3-1 morning line favorite making his first start for trainer Bret Calhoun after running twice for Tom Proctor. The daughter of Tapit broke her maiden in June at Arlington Park then was a good second in her next start in August. She has not run since then, but has been working well at Churchill Downs. Proctor’s horses don’t often win first out and if they do, they hardly every run well in their second start. This may be a top class filly.

After the favorite, the line opens up with five fillies and mares less than 10-1. Second choice on the line at 9-2 is Smittenwithkitten.

Smittenwithkitten goes for a top class barn and may just be an add based on that. The Ramsey’s started off the meet a bit slow, but have picked things up in recent weeks. By their stallion Kitten’s Joy, Smittenwithkitten is a must use if she is bet down from her morning line.

Book Club has run three times and based on speed figures, will need to improve to beat the favorite. The Wayne Catalano-trainee ran once at Del Mar for Bob Baffert in 2012 and has run twice for her current trainer in August and September. She broke her maiden gate to wire and that may be how the jockey will ride her on Saturday.

Confession is 8-1 on the line and perhaps a sneaky play under jockey James Graham. In addition to Tapit’s World and Book Club, Bear On the Run will add speed, which may set it up for Confession and the closers. Graham rides lights out when he’s on a long shot.

Others to consider are Finura, if bet out of the Wesley Ward stable, Belle Chausse, winner over this course and distance last year, and Sweet On You, who is making her first start since April 2013.

Also don’t sleep on the also-eligible J.L’s Princess, winner of her debut two weeks ago at Keeneland.

The second leg of the late pick 4 Saturday at Keeneland is a good one. The one-mile turf allowance drew a field of 12, two on the also-eligible list, and contention runs deep. This is a must spread leg in the sequence.

Cozzetti was pegged as the 7-2 morning line favorite for trainer Dale Romans, but the four-year-old has not won since the Grade 3 American Derby in July 2012, eight starts ago. He continually runs well, finishing second or third, just not getting the job done late. This is not an easy spot for him to break that dry spell.

At 4-1 are Rocking Hall and Exothermic, but before we look at them, let’s move a couple of clicks down the line to Klisz, a favorite runner from a barn that does not start many horses.

Klisz began his career at Keeneland in October 2012 and was bet like a winner from the time the totes opened. He did not disappoint his backers, just holding on to win by a half length. Trainer Michael Ewing then sent him to Southern California and won back-to-back races at Hollywood Park and Santa Anita.

Of course, January was his last win, but is now making his third start off a layoff and the price should be just right.

Rocking Hall just ran the race of his live over the turf at Arlington Park in September and is a bounce candidate. The Showing Up colt look is worth a look if the double probables from race seven are in his favor.

Exothermic is making his second start off an eight month layoff and has every right to improve off his third place finish in a similar race on the turf at Churchill Downs last month. Trainer George Arnold is looking for his first win of the meet; however, but his figures are a fit.

Bellarmine is 8-1 and if he wasn’t breaking from post 12, may be a must use as everything trainer Ken McPeek sends out at Keeneland is live. This will be his first start since a disappointing last place finish in the Grade 3 Smart Jones at Parx in early September. Her two turf starts have resulted in a second and fourth place finish.

Overwhelming is a two-time turf winner for trainer Shug McGaughey and is cutting back in distance after a last place finish in a nine furlong turf race at Belmont one month ago. Joe Rocco Jr. has the call and he may be ridding best of the Keeneland colony right now. Everything he pilots has a chance.

Ground Transport and Saturday Launch are two others to consider in this tough second leg. Post time for race eight is 4:49 pm ET.

The finale of the 2013 Fall Meet at Keeneland is a $50,000 maiden claiming race for three-year-olds. The six furlong Polytrack race may boil down to connections as there are several that come from the top barns.

Artemus Paperboy, from the Wayne Catalano stable, is dropping out of two maiden special weight races and has a bullet five furlong drill over the track in preparation for the race. It is interesting that Catalano drops the ridgling after finishing third, but the horse is owned by Ken and Sarah Ramsey and all they want to do is win.

Often, the Ramsey’s have their horses with Michael Maker, but not in this race as Maker sends out a pair for different owners.

Franklin is a debut runner for Maker and the Padua Stables with workouts up state at Turfway Park. Maker does not win often with his first-time-starters, but the presence of Rosie Napravnik may be a clue this horse can run some. Napravnik has previously ridden the other Maker horse in the race, Gunderson, who is making his first start since February.

In February, Gunderson finished sixth, beaten 30 lengths, in a maiden special weight race at Fair Grounds. The Corinthian gelding has also been working at Turfway Park and appears to have been going in company with Franklin. The two go back and forth between who has the fastest work, but sometimes the fastest works aren’t always the best.

Wesley Ward comes in with a debut runner and unlike Maker; Ward can pop with these types of runners. Struck Gold is by Pulpit out of a Seeking the Gold mare so he should handle the Polytrack surface. Ward puts Dylan Davis in the irons, who teamed up to win on Friday.

That’s it, that’s the final race for the 2013 Fall Meet, Keeneland re-opens in April on the path to the Kentucky Derby.

Stay tuned during the upcoming week for analysis of all the Breeders’ Cup races from Santa Anita on November 1st and 2nd.