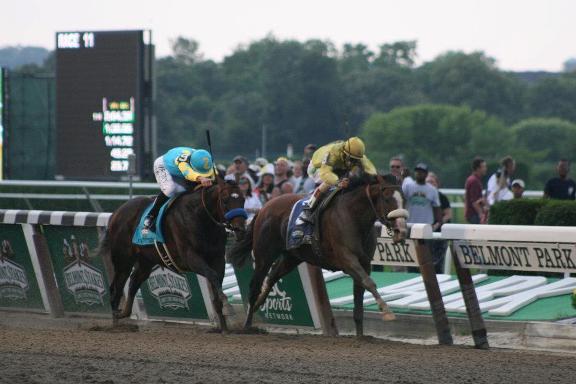 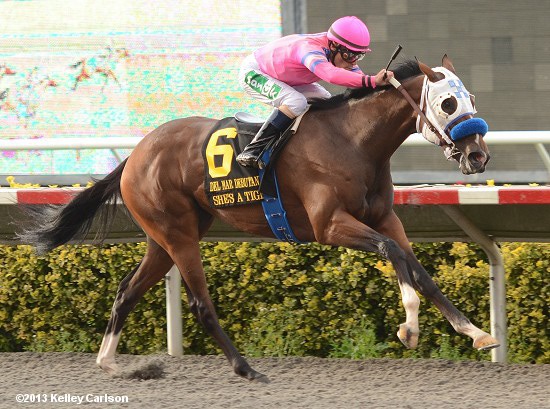 The first of the graded stake races on Saturday at Santa Anita is the Grade 1 Chandelier for two-year-old fillies. It is an important stepping stone to the Breeders’ Cup Juvenile Fillies; let’s take a look.

She’s a Tiger has won three of her four lifetime career starts, including wins in the Grade 1 Del Mar Debutante and $150,000 Landaluce Stakes. In her only other race she finished second by a half length in the Grade 2 Sorrento. The daughter of Tale of the Cat drew post eight and while she is the one to beat, she is not the morning line favorite.

For the first time in her four start career Fascinating will get to run two turns. By Smart Strike, Fascinating is a half to Bodemeister, who finished second in both the Kentucky Derby and Preakness Stakes last year. Fascinating finished a half length behind She’s a Tiger and with the added distance, may be able to close that gap.

The two favorites are making their two-turn debut on Saturday, but Colonel Joan has already been a route of ground. The sire of Colonel Joan is Colonel John so she is bred to love any added distance. Colonel John won the Grade 1 Travers and Grade 1 Santa Anita Derby, two of the most prestigious races for three-year-olds in the country. Colonel Joan may be up to the task even though she is still a maiden.

The trainer of Fascinating is Bob Baffert, who also starts Awesome Baby, winner of her debut before finishing seventh as the even-money favorite in the Del Mar Debutante. Awesome Baby is likely to be the pace-setter; with She’s a Tiger breathing down her neck.

Two others to consider in the trifecta and superfecta are Antiquity and Belle of the Fleet, two maiden winners from Del Mar.

Antiquity won her debut by a widening two and one-quarter lengths in August and has been working over the Santa Anita track since. The $450,000 yearling purchase is by Pulpit so she is another that should handle the added distance.

Belle of the Fleet was second by a neck in her debut then put it all together in her second career start making every pole a winning one. The fillies she runs against on Saturday are tougher, but she looks to have a bright future. Coming out of five and one-half furlong races, expect Belle of the Fleet to be on or near the lead.

It certainly looks like the race sets up well for Fascinating or Colonel Joan, unless that is the track is speed favorite. Pay attention to how the races are run on Friday and early Saturday.

The two-year-old colts get their chance to shine on Saturday at Santa Anita two races after the fillies in the Grade 1 Front Runner Stakes. The eight and one-half furlong race drew a field of 11 with Dance With Fate the lukewarm 7-2 morning line favorite.

Dance With Fate was well bet in his debut, but did not run a step and finished second to last in a field of nine. That; however, may have been the best eighth place finish as the first, second and third place horses in the race all came back to win their next start. Dance With Fate also won his next start, taking a maiden special weight race at Del Mar by an easy length and one-half.

The son of Two Step Salsa then finished second in the Grade 1 Del Mar Futurity, a half-length behind Tamarando, who is also in the Front Runner.

Tamarando is 4-1 on the line, perhaps due to the fact that Dance With Fate had trouble in the Futurity. Tamarando is on a two-race win streak and is bred to handle the added distance. The one question will be how the track is playing as the son of Bertrando likes to come from off the pace.

Schoolofhardrocks was deemed one of the best horses to have worked in the mornings at Del Mar this past summer and has the stride and ability of a classic runner. He drew post two and can win from just off the pace. He did look a little green in his debut, but with improvement will be hard to beat.

Ontology is a grand looker and is going to break his maiden at some point down the line. He may find one or two just better here as he has in his four races to date. He was second in his first two then fourth in the Grade 2 Best Pal before finishing second in the Juvenile Turf. New pilot Corey Nakatani may opt to send from the rail draw, but he must outrun Can the Man.

Can the Man could make it a very profitable day for trainer Bob Baffert as he sends out contenders in three of the Grade 1 races on the card. Can the Man won his debut as the 1-2 favorite back in August at Del Mar then was third behind Tamarando and Dance With Fate in the Futurity; come and catch him.

Baffert also trains Roundupthelute, who is the only starter in the race to have won over conventional dirt in the field. He is 9-2 on the morning line and may be a sneaky play if ignored.

Next stop on the day, the Grade 1 Zenyatta. Post time for the Front Runner is 7:00 pm ET. 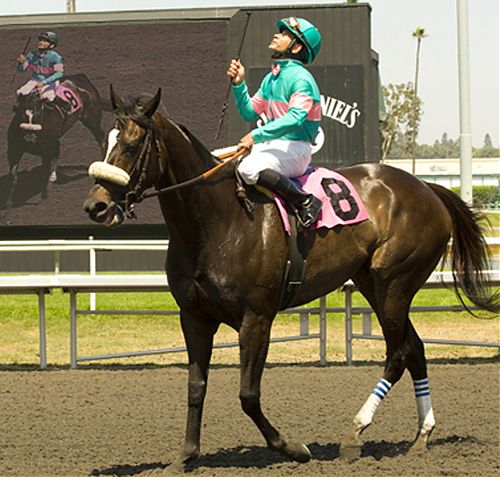 Two races after the Front Runner is the Grade 1 Zenyatta for fillies and mares. The race named after one of the greatest runners to ever set foot on a track has eight fillies and mares with six Grade 1 or Grade 2 winners.

Joyful Victory has won seven of her 19 career starts with five second and three thirds. One of her seven wins came in the Grade 1 Santa Margarita at Santa Anita back in March and she was second in the Zenyatta last year. A five-year-old mare, Joyful Victory is coming off a dominant win in the Grade 2 Molly Pitcher at Monmouth Park in July.

Authenticity is the second choice on the line at 5-2 and has been in-the-money in nine of her 10 career races She was off from July 2011 to January 2013, but has come back even better. She won the Grade 2 La Troienne at Churchill in May and also the Grade 3 Schuvee at Saratoga in July. Her last race was the Grade 1 Personal Ensign where she finished second to Royal Delta. She may face that rival in the Breeders’ Cup Distaff, kudos to the Breeders’ Cup to going back to its original name, but there are no Royal Delta’s she has to face on Saturday.

Third choice on the line and may be the one to play is Beholder, the three-year-old taking on elders for the first time in her career. Beholder just dominated her rivals in the Torrey Pines at Del Mar three weeks ago and loves the Santa Anita course. The daughter of Henny Hughes has won four of five at the Great Race Place including last year’s Breeders’ Cup Juvenile Fillies. She will likely be out front with Joyful Victory, which may set the race up for a closer.

Authenticity will come from off-the-pace as will Include Me out and Flashy American. Include Me Out is a two-time Grade 1 winner and has won three of seven at Santa Anita. She won the Grade 1 Santa Margarita over a sloppy Santa Anita track in March of 2012 and was third in the Zenyatta and Breeders’ Cup Distaff last year. Her eighth place finish in the Clement L. Hirsch at Del Mar last month was disappointing, but she is back on her preferred surface and will get some pace to run into.

The best closer, on paper, appears to be Flashy American, who is making only her second start against graded company. The filly, who could have been claimed for $25,000 last year at Saratoga, has won four of her last five races with her only defeat coming to Authenticity in the Grade 3 Shuvee. Not sure if Santa Anita will play to her running style; however, but if the track is fair, look for her at the eighth pole.

Rounding out the field are long shots Great Hot, winner of the Grade 2 Santa Maria over the track in February, Via Villagio, winner of the Grade 3 Railbird in May 2012 at Hollywood Park, and More Chocolate, who always seems to promise more than she delivers. More Chocolate won the Grade 2 La Canada in near wire to wire fashion over the track in January, but has yet to win in her four starts since. She could improve, but she will have to in order to upset the favorites.

Post time for the Zenyatta, which is the second leg of the late pick-4 that kicks off with race eight, is 8:00 pm ET.

The last of the Grade 1 races on Saturday, but certainly not the least, is the $250,000 Awesome Again Stakes for three-year-olds and upward at nine furlongs on the main track. Trainer Bob Baffert has three of the top contenders, headlined by Paynter, shown above in the 2012 Belmont.

Paynter has overcome a lot since winning the Grade 1 Haskell in July 2012 at Monmouth Park and his every stepping foot on a race track again is a miracle in itself. He not only came back, but he came back and dominated an allowance field in June then was second in the Grade 2 San Diego at Del Mar. In his last start, as the 3-2 favorite in the Grade 1 Woodward, Paynter never looked comfortable and finished last of five.

The son of Awesome Again is back on what should be fast dirt and can win from either on or just off the pace. His race in the Woodward may have proved that he is a need-the-lead type and while he is fast, there is other speed in the race that could compromise his chances.

Baffert also will run Liaison, two-for-five at Santa Anita, and Take Control, son of the great Azeri, and both have a shot to hit the board at square prices.

Looking to push the pace will be Golden Ticket, Soi Phet, Chief Havoc and Summer Hit. Not to mention Mucho Macho Man, who will likely be within a length or two of the early pace.

On paper, the race sets up for Jeranimo and You Know I Know, two horses that have done their work over synthetic surface or on the turf.

Jeranimo will be making his dirt debut in the Awesome Again, but has an electric late kick that he will try to replicate on the surface switch; his breeding suggests he should do just that.

You Know I Know has actually run on the dirt even though you cannot find it on his past performances. All three of his dirt starts have come at Santa Anita and he has a second and a third place finish in those races. He seems to have a win-loss patter, which means he is coming up to a win. His bullet drill on September 22 over the track looks like the will handle the dirt just fine.

Of those pace players mentioned above, Much Macho Man gets top billing. The son of Macho Uno was third in the Grade 1 Whitney in August and second in the Breeders’ Cup Classic at Santa Anita last year. Expect jockey Gary Stevens to play the race by ear early then move into contention rounding the home turn.

It should be a great stretch run and one that will put first post for the Breeders’ Cup on the clock.

First post at Santa Anita on Saturday is 4:00 pm ET with the Awesome Again off at 8:30.