A Thursday stakes race at Delaware Park this week with the $50,000 Forever Together for three-year-old fillies. Forever Together was a great turf mare in her time, winning multiple Grade 1 races including the Breeders' Cup Filly and Mare Turf, so naturally this race is on the turf. A field of 11 was drawn for the mile race with Remember Then the 7-2 morning line favorite. 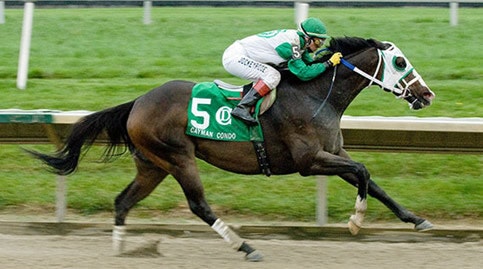 Forever Together raced for trainer Jonathan Sheppard and was owned by Augustin Stable, the same owner/trainer combination for Remember Then. The Pupit filly cost $350,000 as a yearling and has won all of her three starts. While she is making her turf debut in the Forever Together, there is no doubt Remember Then will handle the surface switch. The only question will be price as it is expected to be a lot lower than 7-2.

They don't just give out stakes wins so Remember Then will have to work for it.

Mia Bee A looks to be the speed of the speed, stretching out from a five furlong turf sprint at Canterbury. Mia Bee A is trained by McLean Robertson, who also starts Stoupinator, winner of a stakes race on the Canterbury turf in her last start. Mia Bee A is a front-runner; Stoupinator will be doing her best running late.

She's Not Lazy just won a tough allowance race at Saratoga and makes the trip to Delaware from the Fair Hill Training Center for trainer Graham Motion. She's Not Lazy ran on the Delaware turf two starts back, finishing third in an one-mile allowance.

Miss Lamour also ships from Fair Hill after a sixth place finish in the Riskaverse Stakes at Saratoga two weeks ago. The Michael Matz-trained filly won two starts back and three back was second in an allowance race over the Delaware turf. She will be pushing the pace early with Miss Bee A.

With a solid pace, Vicky Ticky Tavie rates a long shot look. By Eddington, Vicky Ticky Tavie has won two of her last three races and is one-for-one over the course. Trainer Hamilton Smith is having a solid Delaware meet and jockey Xavier Perez is looking to add another stakes to his resume.

It would be fitting if Remember Then wins, but it looks like a wide open race and one that could go many ways.

Post time for the Forever Together is 4:45 pm ET.